NEWARK – After fielding numerous jabs in the media about how she doesn’t have a real campaign operation, Speaker Sheila Oliver (D-34) this evening opened her official U.S. Senate campaign headquarters, packaging herself as a scrappy populist dedicated to fulfilling the interests of the underserved – starting with women.

“Of the 14 federal representatives from New Jersey – two senators and 12 congress people – not one of them is a woman,” said the speaker from East Orange.

She pointed out that while Democratic women pound on doors for the party they hope represents diversity, it is the Republicans who last put women in congressional seats: Millicent Fenwick and Marge Roukema.

“The time has come for women – activist women, political women, professional women – to stand up and represent women,” said Oliver, who feels the U.S. Senate has become an exclusive club of millionaires far removed from America’s streets.

A social worker by trade and champion of raising the minimum wage, Oliver wants to prioritize an urban agenda. And she wants to diminish the atmosphere of violence in the country that helped foster the Trayvon Martin/George Zimmerman tragedy in Florida.

“Florida’s ‘Stand your ground’ law contributed to the atmosphere,” she said. “These laws are unjust” and must be repealed.

“We don’t need a senator who is going to represent New York, California, Wall Street, Hedge Fund managers or Hollywood actors and actresses,” she said, an elbow at the mayor and frontrunning U.S. Senate candidate.

In his turn at the lectern, Rice ripped Booker in a fiery speech – one that had Oliver operatives cringing and making sure to point out that while they welcome the senator’s support, he doesn’t speak for the campaign.

Booker mowed down Rice in a 2006 mayoral matchup, an outcome Rice has long described as the result of a short runway election.

“We need a real leader like Sheila Oliver, and not some fictitious personality who’s an actor,” Rice said. “Go back to Hollywood. Go back to Harrington Park.”

The crowd of over 100 supporters on the 15th floor of the Berger Organization Building responded with sustained whoops of hallelujah.

“The Joe D’s of the world and the George Norcross’s of the world can love us one day and then tell us our candidate can’t win,” he said. “She will win.”

Earlier today, Essex County Executive Joe DiVincenzo, the man who leads the outfit that made Oliver Speaker of the General Assembly, walked down Ferry Street, singing the praises of Republican Gov. Chris Christie, who heaped praise in return on the powerful Democrat.

“In the Ironbound?” Oliver said, referring to the East Ward neighborhood. “When I heard Governor Christie was in town, I gleefully said let him walk the streets in the South Ward.”

That’s where Oliver grew up. 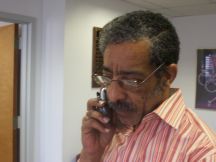