Another candidate for mayor of Newark may get in the contest in the fall.

When PolitickerNJ.com asked him if he is planning to run for mayor, Central Ward Councilman Darrin Sharif said, “that is something I’m considering but I’m going to decide for certain what my political future will be at the end of September.”

An uptick in buzz around Sharif started this week with news that the councilman plans to issue a citywide newsletter next week discussing his accomplishments over the course of the past three years.

On Aug. 6, the councilman plans a formal sit-down with his supporters.

City residents should also expect to see a revamped website and blog from the possible mayoral candidate.

“No one should feel entitled or ordained to be the next whatever,” he said of the current field. “We have to look at a post-Booker era and who can really bring people together. No other ward has the economic development that the Central Ward has seen. I have my enemies but one thing everyone agrees on is I’m always disciplined and focused.” 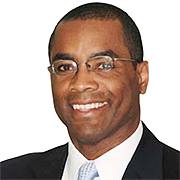