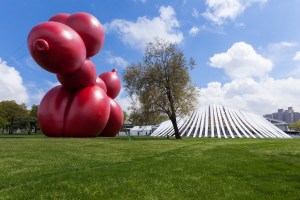 A work by McCarthy at Frieze New York 2013. (Getty Images)

Is bigger art always better art? Certainly in the age of Instagram, anything monumental is hard to discredit; people are easily impressed and love to obsess over questions like “How did it get here, how was it made and how much does it cost?” Somehow they forget the basic questions: “What is it and why is it?” Wouldn’t you have expected that after the financial crisis of ’08-’09, we would return to that classic art buyer’s rule of thumb: “If it doesn’t fit over the mantel, don’t buy it!” We’ve all felt the shift. The days when private museums were buying up sprawling installations by living artists seem to be behind us; a respected owner of a private Miami museum recently said to me, with a straight face, “If it doesn’t look like an auction lot, I won’t buy it.” The really big art is rarely in the art fairs, and meanwhile living-room-friendly pieces are being offered just about everywhere.

Well, not quite everywhere. Big art can still be found in the mega-galleries, where the humongous stuff just won’t roll over and die. It keeps popping up, despite economic realities. The biggest and most successful proponent of super-sized art has long been Jeff Koons, who created the monumental topiary sculpture Puppy in 1992 and has famously turned a bouquet of tulips, a typical hanging heart pendant and a classic balloon dog party favor into shiny, multi-ton aluminum behemoths priced into the millions of dollars. Though they’re big and expensive, the scale of these works is fitting, and their message of exuberance and childlike wonder is enhanced by their monumental stature and high-production finish. For years, Mr. Koons has been trying to realize a piece for the Los Angeles County Museum of Art, a fully functioning steam engine dangling from a giant crane. That piece might be too big even for him; they haven’t found anyone to pay for it yet, but time will tell.

California-based Paul McCarthy has also joined the ranks of artists who super-size. And he has often deliberately taken on the role of the “anti-Koons.” The artists represent two sides of a coin. Mr. Koons elevates lowbrow kitsch to the status of highbrow art. Mr. McCarthy lowers kitschy themes (Disney characters, “rum punch” pirates) by desecrating them and indulging of all of their sundry scatological possibilities in his ketchup- and chocolate syrup-splattered films. Mr. McCarthy’s 2002 Michael Jackson Fucked Up is an excremental reprise of Mr. Koons’s famous porcelain Michael Jackson and Bubbles of 1988. And surely you didn’t miss Mr. McCarthy’s 80-foot-high inflatable Balloon Dog that sat outside the Frieze Art Fair on Randall’s Island two months ago, a rubber, Thanksgiving-parade-float-style reprisal of Mr. Koons’s famous, gallery-scaled stainless steel trophy from the “Celebration” series. The McCarthy piece may not be valued at $20 million like the Koons, but it wasn’t free either—his gallery was reportedly able to sell the inflatable for a million dollars, and a smaller version of the piece was offered for sale in the Frieze booth as an affordable multiple. By supersizing to ginormous proportions an already large and expensive sculpture, Mr. McCarthy was playing with scale and meaning, at once elevating the importance of Mr. Koons’s work and turning it into a childish folly.

The inflatable, building-sized dog outside Frieze succeeded as a one-liner—a huge balloon in the shape of a giant aluminum cast of a small balloon dog—but it didn’t do much more than that; when it was deflated at the end of the fair, I knew it wouldn’t be missed. These days, I’ve come to question more than ever before whether it’s enough for an artist just to make something really big. Last month, Messrs. McCarthy and Koons were featured in dueling shows, prompting leading critics like the Times’s Roberta Smith to meditate on the bigness question. The Koons show, at Gagosian, had three new ultra-shiny monumental aluminum balloon animals: a rabbit, a monkey and a swan. Mr. Koons’s famous “Celebration” series, of which these new sculptures are an extension, took a decade and one dealer’s close call with bankruptcy to get into production. Now these pieces are synonymous with the huge, expensive trophy art that sits at the very top of the Contemporary Art pyramid. But did the world really need to see more and more of them? Might these new ones be merely late and superfluous additions to the series? Just one of these monumental sculptures would have been enough to wow any viewer, whether it be a jaded New York art critic or a newly minted billionaire from Azerbaijan; placing three of these mammoths right next to each other was super-impressive, but it also had the distinct feeling of a new car lot.

I felt the same way about the McCarthy show at Hauser and Wirth. Titled “Paul McCarthy: Sculptures,” it featured monumental, Snow White-based wooden figures, all of them rendered in highly polished walnut, lending the irreverent composition a strong whiff of luxury—and big money. Though it was visually appealing, I’ve seen Mr. McCarthy do pretty much the same thing in rubber and in bronze, so I didn’t really find anything new in the work other than the price.

And now the Park Avenue Armory has opened its own wildly popular McCarthy three-ring circus, titled “WS.” (According to an article in last week’s Times, the Armory has already seen record attendance for the NC-17 show.) The building is dimly lit and filled with a dark giant plastic forest and several wrecked prefab homes; it looks like a set for a cheap horror flick. Several massive movie screens hang above, playing a seven-hour-long film documenting a seemingly endless “art performance” in which the White Snow character (based, of course, on Snow White) fornicates, expectorates and defecates while the dwarves look on or join in, and the artist himself, disguised as Walt Disney, rampages through the set in his boxer shorts, squeezing ketchup on everything.