In the late 1960s and early 1970s, California was a contemporary-art backwater. Without a strong gallery system, work wasn’t likely to sell, and fine art existed in Hollywood’s shadow. Art professors and MFA students are always underdogs compared with the entertainment industry, but those on the West Coast—“snotty surfer upstarts,” as one artist put it—were considered even more so, by dint of the fact that they weren’t in New York. The best works in this exhibition curated by Constance Lewallen and Karen Moss take advantage of that outsider position, making use of art’s ability to conjure or invent new meanings and contexts.

The standout piece is Allen Ruppersberg’s Al’s Grand Hotel (1971). Stationery announces that you can rent rooms in “The grand hotel,” a fictional/real hotel-as-art-project. Life-size cutouts show the artist as a shirtless cowboy—a kind of counterculture maître-d’—flashing a peace sign. A soundtrack of country songs played by Terry Allen on the opening night of the hotel event (from a 2011 LP) is paired with a guest book. That the whole thing takes place within the framework of art-making complicates the endeavor, blurring the line between doomed business, party, happening and savvy cultural capital-
producing endeavor.

Paul Kos, a Bay Area conceptual artist, has perhaps the second-coolest piece, Sound of Ice Melting (1970), with eight boom mikes, cables and speakers, and a Yamaha mixer all hooked up to a puddle of (which presumably had once been a block of ice). My one quibble with the show’s installation is that Mr. Kos’s Roping Boar’s Tusk video of 1971 is projected too high to see, at something like 90 inches—consistent with a recent museum installation trend that seems to consider video work a new kind of decorative upper-wall motif rather than something a viewer might actually care to watch.

John Baldessari’s California Map Project Part 1 (1969/2009), in which photographs of letters written into or found in the California landscape spell out the word “CALIFORNIA,” exemplifies some of the formal strategies at play at the time. “L” is a snapshot of a local telephone pole and its perpendicular shadow; stones in a riverbed make an “R.” A map showing where to find the letters is keyed to Death Valley, Joshua Tree and Lake Shasta. Elsewhere in the show, Ed Ruscha’s artist book Every Building on the Sunset Strip (1966) matches Mr. Baldessari’s emphasis on local landscape and found, “one thing after another” composition.

Some artists here will be better-known to New York audiences: Martha Rosler makes a strong showing with her political collages that mash up images of domestic spaces and images of war. A single David Hammons print stands in for other, better-known artworks by him. These were presumably covered in greater depth in other portions of “Pacific Standard Time” exhibition series, which took place two years ago at multiple venues in California and included this show; here the display looks sparse.

Other highlights are William Leavitt’s Symbolic Images, which explores the tongue-in-cheek pairing of image and meaning (a photograph of a white swan is labeled “The Virgin,” a photo of a vine “Community”), and Guy de Cointet’s A Page From My Intimate Journal (Part I), 1974, which puts the secretive in plain sight with a giant page of what appears to be encrypted text. Lowell Darling critiqued the art world with his Fat City MFA forms (1970) which awarded “Fat City School of Finds Art” degrees to anyone who picked one up.

Classics from the art history books abound: in Chris Burden’s video SHOOT (1972), a friend shoots him in the left arm with a .22 rifle. From Bas Jan Ader’s In Search of the Miraculous, we see the sheet music of six sea shanties and the invite announcing his voyage—the display is now elegiac, as the romantic conceptualist disappeared on this 1975 journey, an attempt to sail across the Atlantic Ocean in a small craft. In Suzanne Lacy’s Anatomy Lesson (1976), she covered her naked body in sheep guts. If you haven’t seen enough of Paul McCarthy lately, what with his giant installation at the Armory building and multiple gallery exhibitions in the city, his Black and White Tapes Version 3 (1970-1975), gets you quite intimate with his anatomy, while Bruce Nauman’s Walking in an Exaggerated Manner around the Perimeter of a Square (1967-1968) conjures nothing so much as John Cleese’s Ministry of Silly Walks on Monty Python two years later.

Some work stresses perceptual experience: a golden glow pervades Mr. Nauman’s Yellow Room (Triangular), from 1973. A sign for Barbara T. Smith’s Field Piece (1968-72), a forest of phallic plastic tubes, encourages you to take off your shoes and interact, but a picture of naked hippies from the ’70s frolicking on the sculpture will discourage the hygienically minded. Michael Asher’s heat-molded No Title (1966), a hot-pink Plexi car-window-shaped sculpture, speaks to California car culture.

Overall, “State of Mind” is a savvy, fun road trip through California conceptual cool. The show’s levity and refusal to dwell may belie the brilliance of some of the heavy-hitters here, but in general these smart, low-key artists are still too little known in New York—it’s well worth the trip. (Through Sept. 8, 2013) 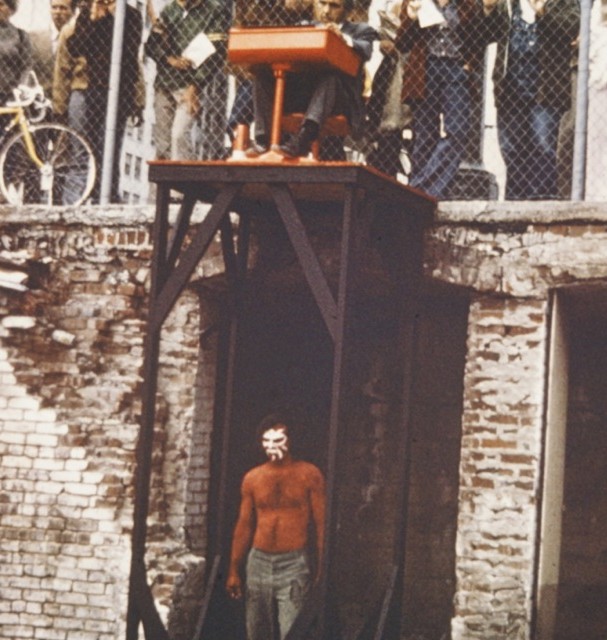