With two major elections looming on the horizon, the Mercer County Republican Party is once again in disarray, according to party members and a string of emails obtained by PolitickerNJ.

According to an email chain between the party’s treasurer and members of the executive team, the county party is broke and in debt and at least some members are in open rebellion against county chairman Rich Levesque.  This month, the party vacated its headquarters and is now sharing space with the 14th Legislative District candidates.

For at least two weeks, party treasurer Rich Perilli has been warning Levesque about the county’s finances and asking for an email list of executive committee members so that he may send out his monthly report as required by the constitution.

According to the emails from Perilli and a response from Levesque obtained by PolitickerNJ, the chairman has not called a meeting in some time and has resisted the reporting of the finances to the executive board.

“With a total balance of $71.22, Along with the accumulated debt and services ready to be turned off, the MCRC does not have ability to function without any recievables.(Sic),” Perilli wrote.

Asked to comment on the email chain, Perilli, son of former Hamilton Township Mayor Maury Perilli, said the party is insolvent and he has called on Levesque to resign.

For his part, Levesque has resisted Perilli’s attempts to distribute the financial reports himself, instead demanding they be sent to Levesque for distribution.

“I am telling you that I am the chairman and will handle communication with the executive board,” Levesque snapped at Perilli during an exchange in which Perilli accused Levesque of withholding the information on the party’ insolvency from the committee.

According to one source, party Vice-Chairwoman Lisa Richford has called a meeting of the executive committee for later this month to discuss finances and party leadership.  Richford said she has gotten numerous calls from party members, constituents and candidates who say they have not seen Levesque at party events and the party has not had an executive meeting since April.

Richford said she does not foresee any move on Levesque but has suggested the meeting as a way to clear the air and help move the party forward.

But Levesque said the issues amount to nothing more than a whisper campaign from a few disgruntled members of the party.  The headquarters moved, Levesque said, because the store owner who had been renting them the space at a discounted rate found a new tenant.

“I think this comes from a small group of people that are dissatisfied with the communication from the party,” Levesque said.  “But our candidates are working harder than they ever have before to reach out to voters. Our GOTV efforts, our letters to the editor and our pushback on an 11 percent county tax hike are things we’ve never been able to do in the past and I think our candidates are well positioned for the upcoming November election.”

Levesque also pointed to the recent scandal that sent former Hamilton Mayor John Bencivengo to prison as well as the economy for the party’s fundraising issues.

But this fall, Bencivengo’s replacement, Republican Kelly Yaede, as well as former state Sen. Peter Inverso, are running important races in the county and will likely have no financial support from the Mercer GOP.

This is far from the first time the Mercer GOP has faced strife over leadership.  Three years ago, then-chairman Roy Wesley resigned after several members of the party, including former Congressional candidate Scott Sipprelle, attempted to oust him from power.  The battle for power was vicious and public and culminated with a change to the party constitution to allow for the removal of the chairman. 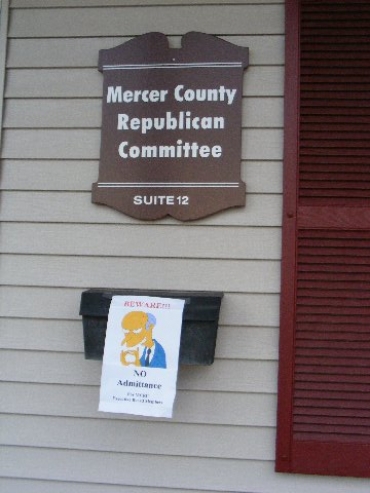