The state’s top Senate lawmaker is challenging a Gov. Chris Christie appointee in court, according to Senate Democrats.

Senate President Steve Sweeney said in a statement Tuesday he filed a suit to prevent Martin Perez from being sworn in as a member of the Rutgers’ Board of Governors.

“I have taken action today by filing a lawsuit to remove Mr. Perez from the Board and I am fully confident that the court will see this for what it is,” Sweeney said.

Christie sidestepped the Democratic-controlled Senate late last year when he announced his decision to appoint Perez to the Rutgers governing body. The nomination was being held in the Senate by way of “senatorial courtesy.”

According to the documents filed in court, Sweeney argues Christie’s appointment fails to meet a residency requirement set forth in the higher education restructuring statute.

“The statute provides that these two new appointments could be made without the advice and consent of the Senate subject to certain conditions,” the documents read.

“Specifically, of these two new gubernatorial appointments, one could be directly appointed to the [Board of Governors] by the governor without the advice and consent of the Senate so long as the member is a resident of Camden County,” it continues. “The second gubernatorial appointment had to be a resident of Essex County and be recommended to the governor by the president of the Senate and speaker of the Assembly.”

Immediately following the announcement, Sweeney tore into Christie and accused the governor of breaking the law and of pandering to the Hispanic community.

Christie announced appointing Perez to the board under new authority granted to him by the historic higher education merger.

Smith praised his Senate  colleague for mounting a legal challenge against the appointment.

“I commend the Senate President for taking action to reverse the governor’s appointment of Mr. Perez to the Rutgers Board of Governors,” Smith said in a statement. “Especially at this critical time in the history of higher education in New Jersey, it is imperative that we ensure the proper process is followed concerning all aspects of the restructuring act, including board appointments.” 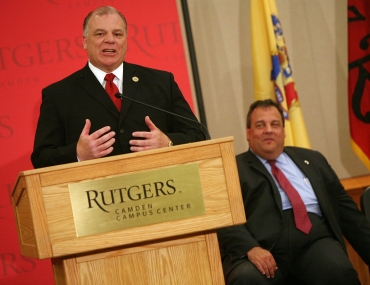