“So what craziness is going to happen next?” a Democratic operative asked Politicker Sunday night. “Is Ed Koch going to climb out of the grave and join the field for public advocate?”

“This is a land of second chances.” Mr. Spitzer said early Monday morning during a round of television and radio interviews. “I think it is a land of forgiveness.”

At the moment, however, New York City’s electoral atmosphere feels more like a variety show.

The New York Post, gleefully embracing the story of the second sex-scandal-scarred pol running for major citywide office this year, went with “HERE WE HO AGAIN” across its wood Monday. On Tuesday, the Daily News featured a cringe-inducing photo of Mr. Spitzer with his tongue out, captioned: “I’ll lick ’em all … That’s his pol rivals, not, er, escorts.” Kristin Davis, the former “Manhattan Madam,” who claims she supplied Mr. Spitzer’s call girls—and, unlike him, was jailed for it—promptly declared her own candidacy against Mr. Spitzer on the Libertarian Party line, potentially setting the stage for some ridiculous debates even if she has little chance of winning. “Gosh, it’s going to be a fun race!” she exclaimed in an interview Sunday night.

“Bizarre is putting it mildly,” St. John’s University Professor Brian Browne mused. “What has been a sleepy citywide race has really woken up. This is national news now.”

Mr. Spitzer, of course, infamously resigned in March, 2008, after a short-lived, rocky gubernatorial tenure marked by gridlock and dysfunction. Mr. Spitzer, who nicknamed himself “steamroller” for his attempts to bend Albany to his will, was felled by revelations that he had a call-girl habit costing him tens of thousands of dollars of legally questionable transfers.

Partially because of this baggage, the former governor’s sudden jump into the race left consultants across the city dumbstruck. No one had seen his candidacy coming; Manhattan Borough President Scott Stringer had been unopposed in the Democratic primary and was expected to waltz into the comptroller’s office.

Whether shock can give way to salvation this fall is something voters must decide; at this point, the city is still digesting the news that Client No. 9 has thrust himself back into political life.

After the round of morning interviews, during which he requested forgiveness while strangely echoing Mr. Weiner’s own sex-scandal talking points (e.g., pivots like, “Let’s talk about the real issues” and “I took responsibility for that long ago”), Mr. Spitzer held court in Union Square before a mob of reporters and cameramen crushing one another to get closer to the celebrity candidate. As every court needs a jester, a heckler dutifully appeared on the scene.

“Eliot! Why were you late? Were you with a hooker?” the unnamed man bellowed shortly after Mr. Spitzer arrived, dressed in a navy pinstripe suit and matching blue striped tie despite the stifling heat. “Did you leave your black socks on?” Mr. Spitzer tried his best to ignore the shouting, but it continued.

“You let everybody down.”

“You and Weiner, you’re both jokes!”

Mr. Spitzer didn’t back down. “You know, this is politics. And I’ve been in politics for a long time … You don’t get into this fray if you don’t know this going to happen,” he reflected. “This is New York. This is politics. I’m game for it. I’ve got skin as thick as a rhinoceros. And so I’m ready for anything.”

The star of the show, who has filled some of his considerable downtime these past five years hosting and guest-hosting news programs, appeared to relish the attention. He took questions for more than an hour, seemingly unable to stop himself from repeating the same answers, even as he tried to break free from the gaggle to make his way around the park.

“It feels a little claustrophobic right row, a little hot in here,” he said when asked how he was feeling. “But you know, I love it. I love the maelstrom. I love the screaming. I love the shouting. But what I love most of all is doing things for the public.”

Mr. Spitzer now has just days to collect the thousands of valid signatures he’ll need to make it on the ballot to challenge Mr. Stringer, who has already snagged nearly every Democratic establishment endorsement. And while he said he was confident that he’d be able to collect all the names he needs, the process was clearly not as easy as he’d anticipated.

“Well, if I weren’t surrounded by 30 cameras, I’d probably speak to some real voters,” he said. Frantic ads have since appeared on Craigslist and other jobs sites begging for canvassers to help what is almost certainly Mr. Spitzer’s bid. One former Democratic operative told Politicker that he was “approached by a friend in desperate search for any leads on Dems willing to fill Eliot petitions, willing to pay top dollar.”

How the outcome of the primary will be altered, only two months’ time will tell.

“The only thing that changes,” Mr. Stringer told reporters Monday, “is more of you follow me around now.”

As for Mr. Weiner, the other redemption-starved candidate driving the cycle’s figurative clown car, Monday’s schedule left him standing in Chelsea before his own, far smaller, crowd of reporters uninterested in the topic of his press conference—tax breaks to promote bicycle commuting.

“I think everyone was surprised. But it hasn’t changed my life at all,” Mr. Weiner insisted when the conversation inevitably shifted to Mr. Spitzer.

Some speculated that Mr. Weiner’s success in the polls, which have ranked him as one of the top contenders in the mayor’s race, could have inspired Mr. Spitzer’s own bid for office. Mr. Weiner, not especially known for his humble life philosophy, didn’t totally discount this theory.

“People are going to view these things through many different lenses. The first question is, because I’m doing so amazingly well, is the reason that this happened? I don’t know,” he offered. “I’ll let the punditry be done by the pundit.”

The pundits are more than happy to oblige. Hank Sheinkopf, a consultant who helped with Mr. Spitzer’s 1998 campaign for attorney general, and who has clashed with Mr. Stringer in the past, said he had no doubt that Mr. Spitzer had taken note. Mr. Sheinkopf also said that, despite his late entry and the circumstances of his downfall, Mr. Spitzer has a serious shot. “He can win this thing,” he said, holding court before his own gaggle of reporters Monday. “Anybody who discounts Eliot Spitzer is an idiot.”

Political observers widely view Mr. Spitzer’s bid as a threat to Mr. Weiner’s. The former congressman has striven every day to rebrand himself from serial sexter to serious statesman, and Mr. Spitzer’s presence reminds voters of everything Mr. Weiner wants them to forget.

Mr. Spitzer’s candidacy “will increase the scandal stories—we’ve already seen it. Now people will be thinking, ‘We’ve got to have an all-perv ticket?’” said veteran Democratic consultant Jerry Skurnik. “I think it increases chances of both of them being considered laughingstocks and not serious candidates.”

“Oh, it hurts,” Hunter College Professor Kenneth Sherrill concurred. “I think that, while one candidate in difficulty of this sort can save himself, there’s a good chance two pull one another down.”

At his Monday press conference, when Politicker asked Mr. Weiner how he thought the media’s obsession with Mr. Spitzer would affect him, he was expectedly blasé.

“Clearly, it’s shifted away,” Mr. Weiner said sarcastically, gesturing to the reporters huddled around him, prompting laughter from all in attendance.

Whether or not the Spitzer and Weiner comeback tours are successful, of course, depends on whether voters are willing to give them a second look after their blatant hypocrisy and dishonesty toward the public—not to mention images of bulging boxer briefs and black socks.

Messrs. Spitzer and Weiner argue the electorate should look to their records, but neither was known as an effective manager in his last public role. Mr. Spitzer’s eight years in the attorney general’s office earned him positive reviews from some quarters as the “Sheriff of Wall Street.” But as governor, he found it difficult to work with lawmakers in Albany, a notoriously intractable bunch.

And Mr. Weiner had few, if any, legislative accomplishments in Congress, instead priding himself on his advocacy. A recent New York Times story detailed his high staff turnover problems while pursuing that advocacy. “In 2005, he became so irritated with a staff member that he threw a salad against the wall, then left the room as the dressing slowly dripped, leaving a stain,” it reads. “Another time, arguing with an aide, Mr. Weiner threw his BlackBerry against a wall, then blamed the aide for the broken phone.”

Some questioned whether the two wayward pols are even eligible for forgiveness. Council Speaker Christine Quinn, whose once-dominant poll numbers in the mayoral contest have tumbled since Mr. Weiner’s entry, said the duo had accomplished little since their respective scandals. Mr. Weiner has touted vague consulting work as Mr. Spitzer has worked the talk-show circuit.

“Running for office in New York City is a serious thing, ’cause it’s really important,” Ms. Quinn said after a Monday morning press conference of her own. “Now I believe in second chances as much as anybody else. None of us are perfect.”

But in politics, there’s always a “but.” 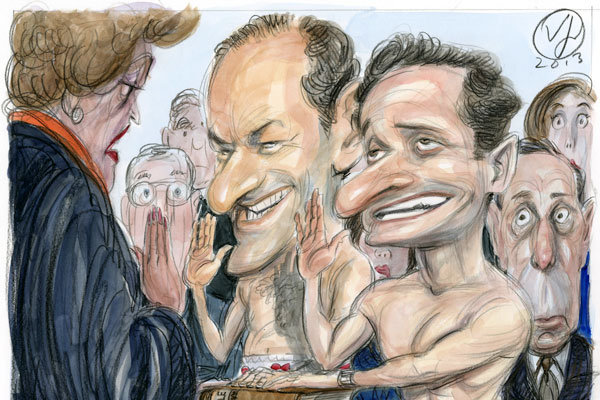