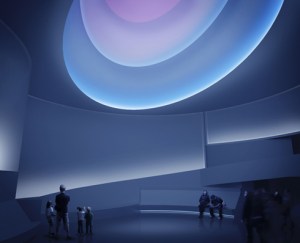 If you care about this sort of thing, the CultureGrrl Lee Rosenbaum reports that the Guggenheim Museum has posted a video that acknowledges its James Turrell installation is not technically one of the artist’s signature “Skyspaces.”

The difference being that it’s covered, unlike the proper Skyspace at MoMA PS1. In the months leading up to the Turrell show, the future installation, which uses the Frank Lloyd Wright-designed museum’s rotunda, was referred to as a Skyspace many times in press materials.

Here’s Ms. Rosenbaum’s analysis of a video recently posted on the Guggeneheim’s website.

“In a real Skyspace, this [the Guggenheim’s version] would not have glass on top of it, and that would not be possible, of course,” notes curator Carmen Giménez. Curator Nat Trotman adds that “the experience of the visitor on the rotunda floor will resemble very much [or, to my mind, not so much] one of Turrell’s Skyspace works, where people gather around the perimeter in the room looking up at a hole to the ceiling that opens into to the sky. What the Skyspace pieces do is bring the sky down into the intimate space of the viewer [emphasis added].”

So there you go.