JERSEY CITY – The theatrical implications were unavoidable at a black-sedan-with-government-plates-free-for-all, as nearly everyone in New Jersey politics attempted to nibble away and claim ownership of some piece of Jersey City Mayor Steve Fulop, who was sworn into office tonight outside City Hall.

“There will be a great many people who come to you with many requests,” said Gov. Chris Christie, who’s one of those people, according to sources who insist that Fulop continues to mull over endorsing the Republican Governor.

Christie stirred an emotional response from the big crowd lapping over the edges of Grove and Columbus downtown: hearty hurrahs followed by a low moan of boos.

The VIP section provided an elbow-to-elbow glimpse of public figures wedged into closer than usual proximity, and the trick was to find those most obviously uncomfortable spur of the moment duos.

For example, it was a crowd that contained Speaker Sheila Oliver (D-32) pressed very suddenly into the proximity of Assemblyman Vincent Prieto (D-32), her much rumored successor in the speaker’s chair.

“Focused on the speakership,” said Oliver, who’s also running for the U.S. Senate.

There was incumbent Hoboken Mayor Dawn Zimmer crammed onto a stage beside Assemblyman Ruben Ramos (D-33), her challenger in the November mayor’s race. A Christie fan, Zimmer could be spied laughing uproariously with Democratic State Party Chairman John Currie.

“We’ll be having lunch,” said Currie, in reference to Fulop.

The state chairman’s seen the same spellbound looks among Democrats for Christie, and while he says it’s not his style to get tough with someone looking to go off the reservation, he simply wants to talk to the new Jersey City mayor.

He endorsed Christie earlier this month.

For his part, Fulop showed a keen eye for political stagecraft as U.S. Rep. Albio Sires (D-8) – a backer of Fulop’s foe former Mayor Jerry Healy – sat in the crowd of comers, reliable survivors and has-beens, while U.S. Rep. Donald Payne, Jr. (D-10) occupied a place on the platform of power within arm’s reach of the new mayor.

Payne – along with Bishop Reginald Jackson – who was likewise up onstage – backed Fulop.

State Sen. Sandra Cunningham (D-31) had a throne, too, among the Fulop A-listers.

Sweeney’s nemesis, state Senate Minority Leader Tom Kean, Jr., (R-21)), was another face in the audience bearing evidence of a Republican comfort level in Fulop world. Remember, this was the man run out of Jersey City by lawnmowers and weed wackers seven years ago.

Kean’s conqueror, Menendez, kidded away the old bad blood between himself and Fulop.

“He even surprised me when he ran against me for Congress,” the senator cracked, reminding the new mayor who won that Democratic Primary, and Fulop laughed in reply.

Mayor Cory Booker was in that mix too, along with former Gov. James McGreevey, Healy and Hudson County Executive Tom DeGise.

When he took the stage, Christie proceeded to make a series of elastic and fun-loving faces at the Hudson pols below and pointed fingers on raised arms could be seen in response.

Any number of operatives who have chewed unsuccessfully locally for years at the edges of power now beamed among the faces in the crowd, assuming proud ownership of Fulop, as if the new mayor epitomized every anti-establishment campaign of the past two decades: a winning and living conglomeration of every bungled fight-the-power bullhorn effort that ever tried to buck the HCDO.

“We’re going after Smith next,” a voice crowed in the crowd, a reference to Bayonne Mayor (and former Hudson County Democratic Organization Chairman Mark Smith), who backed Healy, not Fulop.

But tonight, the old antis weren’t the only ones here.

Speakers included Mahdi Hemingway, a man who grew up in the projects and who befriended a floundering Fulop early in the politician’s carrer.

Fulop helped Hemingway get into finance and the Marines.

“He’s smart but he’s not that smooth,” said the black activist.

His mother died of AIDS, his father just celebrated ten years sober. The projects Hemingway comes from continue to struggle, and in a city of some turmoil, he celebrated, in the name of unity, the presence of Mayor Fulop, who rose politically out of the downtown section of town, but held good to his belief in the promise of a young friend, who, Hemingway said, became a brother.

Menendez and Christie also offered Fulop membership in a brotherhood, of sorts; with the senator promising the power of his federal office and the governor vowing the heft of state. 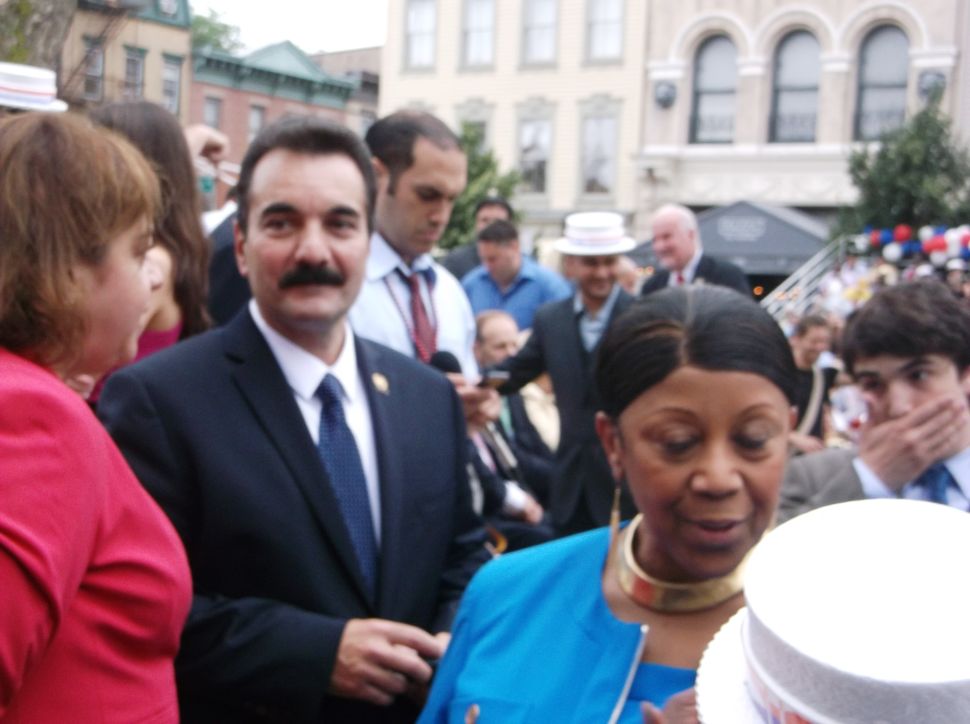