On a rainy Tuesday night, Times top brass mingled with heavyweights from Lincoln Center, Carnegie Hall, IFC, the Weinstein Company and so on over ginger margaritas and on-trend appetizers while boomer-friendly music was spun by deejay duo AndrewAndrew. If the event was subdued by the standards of television networks, it was unusually lavish for a 161-year-old print product.

The main event was a panel conversation in which media reporter David Carr interviewed three of the four recently appointed culture editors who are injecting youthful energy into the place—though the real raison d’etre for the event was feting the organizations that keep the lights on at the Times.

“Cultural matters, depending on how you measure, probably pay a significant part of our bills, enable a lot of the work,” Mr. Carr said. “They make what we do possible.” (What brand wouldn’t prefer to buy space adjacent to a review of the Philharmonic rather than a story about Egyptian bloodshed?)

In March, Jill Abramson appointed Danielle Mattoon as the new culture editor and Sia Michel as the new editor of Arts and Leisure. Ms. Mattoon’s predecessor, Jonathan Landman, took a buyout in January, and Ms. Michel’s predecessor, Scott Veale, left his post to tackle an unspecified editing role at the Times.

In  April, Pamela Paul was named the new editor of the Times Book Review, replacing Sam Tanenhaus. He became writer at large for the paper after editing the section for nine years. (Julie Bloom, the new culture editor of the newly named International New York Times, was not at the talk.)

That all three panelists present happen to be young and blond and looked good sitting onstage was not lost on the moderator, nor, likely, on the audience. “It’s good for people to know that newspapering as done by The New York Times doesn’t always involve a guy who looks like me—vaguely homeless with some pizza on his coat,” Mr. Carr said.

“I was looking for three editors with a driving passion to take our culture report to new heights and lead their departments to the most interesting and important stories in the artistic and cultural firmaments,” Ms. Abramson told The Observer. “At a time when we are broadening our global coverage and creating new forms of multimedia storytelling, Danielle, Sia and Pamela are imaginative, experienced journalists who epitomize innovation and depth. All three are editors about whom writers, critics and reporters rave.”

In many ways, the women now helming the culture section are like its ideal reader: Ivy educated (Ms. Paul is a Brown alum, Ms. Mattoon is a Barnard grad and Ms. Michel went to UPenn), intellectual and attractive. They are the mothers of small children. Instead of the baby boomer Upper West Side demo, the new editors are Generation X.

Ms. Paul, 42, began at the Book Review in 2011 as the children’s book editor under Mr. Tannenhaus. Ms. Paul, who also took on the role of book review features editor, started some of the new features such as “By the Book,” the Q&A section in which authors (and sometimes other cultural figures) name what they read and what inspires them.

“I’ve gotten great reviews and really negative reviews,” Ms. Paul said. Some of those reviews were in the section that Ms. Paul now edits, including Amy Sohn’s lukewarm write-up of Pornified in 2005. “It’s good to remember that there is a person behind the book or galley,” Ms. Paul said.

Ms. Paul, who started the job in May, said she will be unveiling a redesign of the section in September. She has already gotten props for appearing to increase female bylines in a section that has been criticized in the past for lacking them. While she has spoken on panels about gender imbalance, she was quick to shift our conversation to broader diversity.

“It’s clearly an important issue. In book reviewing, there are disparities that persist,” she told The Observer. “It exists not just for women but for writers of different backgrounds.”

Ms. Mattoon’s appointment to the top culture job surprised Times watchers, who had expected A.O. Scott or Jodi Kantor to take over. But Ms. Mattoon, who was editing the Travel section before her appointment, had already done stints in most of the culture sections: she was the deputy editor of Arts and Leisure, and started her newspaper career at the Styles section after stints at Talk, Rolling Stone, Details and The New Yorker.

A magazine writer who used to pitch to her while she was at Arts and Leisure described her as a kind and encouraging editor who replied and gave advice even though she didn’t take the writer’s stories.

Ms. Michel, described by Gawker as a “glamorpuss,” was promoted from deputy editor of Arts and Leisure to the section’s editor, and she will now report to Ms. Mattoon. Ms. Michel, 46, is a cool chick: she started her career at SF Weekly, where, as a reporter and pop music editor, she covered the “emergence of gangsta rap and grunge,” as Ms. Abramson wrote in the hiring announcement.

After SF Weekly, Ms. Michel spent almost a decade at Spin, where she became the first woman to edit a rock mag. When Spin changed owners, Ms. Michel freelanced for the Times as a pop critic before getting a full-time gig in culture in 2007. In 2010, Ms. Michel became the deputy editor of Arts and Leisure. “She’s confident without arrogance,” Times pop music critic Jon Pareles said in the hiring announcement when Ms. Michel joined the staff, “and she calmly executes what she promises.”

Ms. Bloom, the youngest of the bunch, has inspired cocktail party envy ever since her appointment last month, particularly as she not only went from freelancing to a prestigious staff position in 2007, but now she gets to do her job from Paris. The announcement of her hire touted Ms. Bloom’s digital bona fides: she helped turn “ArtsBeat into an up-to-the-minute blog,” among other digital initiatives.

All of which Ms. Mattoon, to whom Ms. Bloom will now report, cited during the June event as evidence of progress in the paper’s cultural coverage.

In the period post-“Snowfall”—that Times interactive triumph of storytelling that the paper has been touting ever since—story interactivity and willingness to take risks in digital journalism are practically a job requirement at the paper.

At the event last month, all three editors mentioned ways that they are going to take the paper into the Internet age (and they did so without mentioning BuzzFeed, which is an accomplishment these days).

Ms. Michel touted the benefits of instant feedback. “At its best, Arts and Leisure should be a conversation starter. One thing that A&L has the luxury to do is that a work of art comes out and you can see how it reverberates through the culture, you can see what controversies, you can see how people reacted on Twitter,” she said. “And then you can come back on Sunday and have a much more big-
picture look at it. You are not just talking about the work of art, you are talking about the ramifications of the work of art.”

Does this trio of editors represent a new lunchroom clique at the Times? Maybe.

“I’m really excited to work with Danielle and Sia,” Ms. Paul said. “I’ve admired them for a long time.” 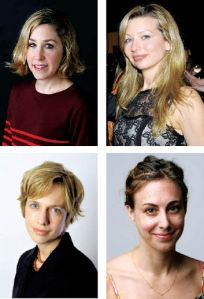