Bill Thompson and Anthony Weiner chatting at a forum.

Former Comptroller Bill Thompson is ramping up his attacks on mayoral rival Anthony Weiner after new fund-raising data revealed Mr. Weiner has been raking in cash from the taxi industry.

Mr. Thompson’s chief strategist Jonathan Price, fired off a missive earlier today accusing the former congressman of coming out against the city’s new outer-borough taxis as a result of the thousands he’s been collecting from drivers and dispatchers, who are largely opposed to the plan.

“Last week, when Anthony Weiner announced he would roll back the hard won struggle to give millions of outer-borough New Yorkers the same right to hail a cab as people in midtown Manhattan, we figured he just didn’t get it. Now we know that Anthony did get it – he got thousands of dollars from the folks who have fought against livery cabs,” Mr. Prince charged. “He played, and they paid – thousands of dollars to his campaign after he promised to shut livery cabs down.”

Filings made public Tuesday show that cab company owners, managers, dispatchers, technicians and bookkeepers contributed at least $16,000 to Mr. Weiner’s campaign over the past two months, bringing his total raised from the industry to well over $28,000.

But, according to the filings, first reported by Capital New York, about half of that cash came in on July 11th–the day that Mr. Weiner came out against the outer borough taxis plan, which will convert 18,000 livery cars into apple-green-colored “borough” taxis, with the aim of legalizing street hails and improving service for millions outside of Manhattan where yellow cabs rarely roam. But the plan is strongly opposed by many yellow cab drivers who fear the new cabs will encroach on their territory.

“I’m going to change that program the moment I get into office,” Mr. Weiner reportedly said on the 11th during a mayoral a forum on aging held at N.Y.U., where he argued the system would make it “much more difficult” to prearrange livery cars in the outer boroughs.

“The mayor created this outer borough taxi plan, which now means that those livery cars, which make a business responding to your calls, are going to be cruising around looking for fares,” he told the audience. “They’re not going to be interested in coming to your house and bringing you shopping.”

Mr. Weiner later told reporters he objected to the way the Bloomberg administration had bypassed the City Council by having the plan pushed through by lawmakers in Alabany, as well as the fact that the new cabs won’t have as stringent standards.

Mr. Weiner’s spokeswoman did not immediately respond to a request for comment, but she previously tweeted a defense of his position.

“Maybe @BillThompsonNYC can explain why it’s ok that bbqsi riders get stuck with older cars,” she tweeted, adding: “perhaps @BillThompsonNYC will explain to seniors why livery cars wont be there for them anymore.” 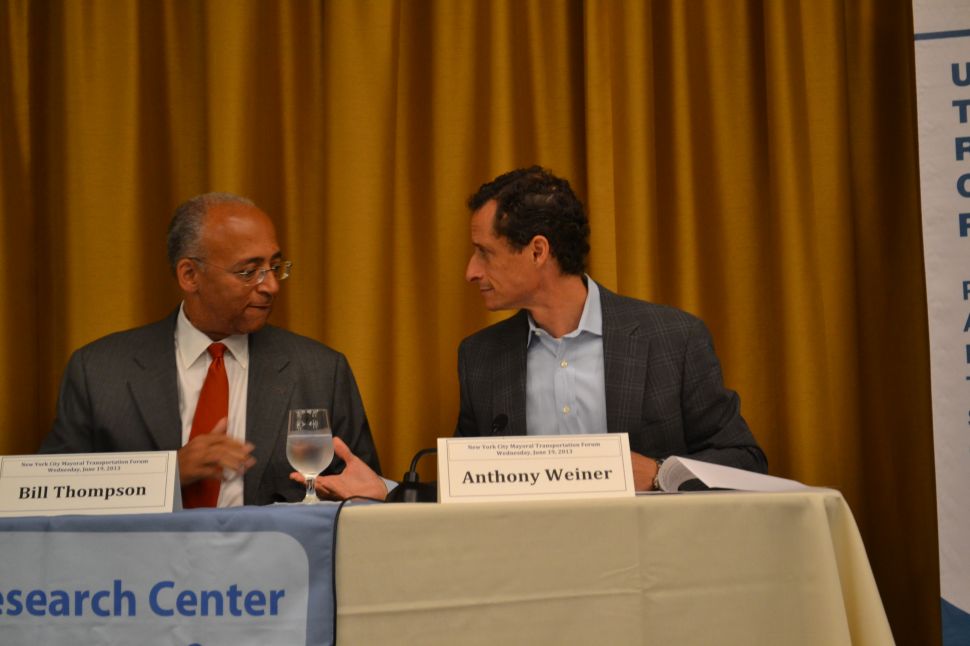