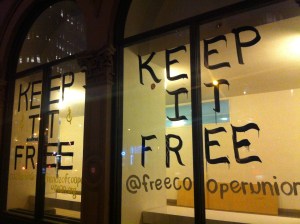 Cooper Union students opposed to the board of trustees’ decision to begin charging admission have reached an accord with administrators and vacated President Jamshed Bharucha’s office after a nearly 10-week sit-in, Art in America reports. The protestors, who descended from the seventh floor of the Foundation Building on July 12, were guaranteed amnesty for breaching the school’s code of conduct, the creation of a 16-member working group that will investigate ways to reinstate free tuition at Cooper, student representation on the board of trustees and the creation of a “community commons.” Students for a Free Cooper Union announced their decision today via e-mail. They additionally plan to found a Free Cooper Union nonprofit corporation that will raise funds to restore the tuition-free model the school sustained for more than 100 years.