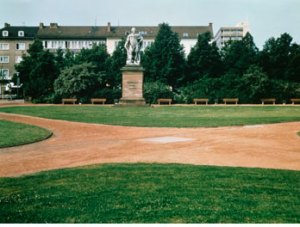 The Lightning Field, The New York Earth Room, The Broken Kilometer, The Vertical Earth Kilometer—pretty much enough to justify declaring Walter De Maria, who died last week at the age of 77, one of the most inventive, coolest artists of the past 50 years. But then you find out that he played drums in an early incarnation of the Velvet Underground, when the group was known as the Primitives? Crazy stuff.

In his very excellent 1972 oral history interview with the Smithsonian’s Archives of American Art he talks pretty extensively about playing alongside Lou Reed, John Cale and other musicians at the time. Here’s one section:

Well, I can’t remember if it was ’65 or ’66, but I joined the Velvet Underground rock group and I met John Cale, Lou Reed and this was six months before they met Andy Warhol. This was when it was just a band and I would have stayed as the drummer of that band and this is very early, if you realize that the Beatles only came on the scene in ’64, to be with a really all electrified guitar rock and roll band. It was a great band, the first band to have any drug lyrics and the first band to have heavy electronic feedback in it. I could have stayed with that band, I mean that would have been my band; that would have been a really great style. It was an acid rock band; it was a beautiful, really great band…And it was very tiring to bring all the drums around, you know, and then after playing all night, you couldn’t do anything during the day and this was a period of months. I thought, are you going to play or are you going to do the sculpture? You know, are you going to be an artist or a musician?

He, of course, became an artist. Here’s a bit more about his reasoning:

I knew that we were really good and they went on to make this great album. But then I said, do I want to go to rehearsal every day and every night, you know, take all these drugs? Do I really just keep playing these rhythms, is that going to be enough? That was really a painful decision. I said, no, put it down. I’m not going to buy another set of drums; I’m not going to haul these drums to another place and I just can’t keep playing these songs. I can’t do it. I don’t want to go out on tour; I don’t want . . . and then of course I was about 29 then. You see, being a musician is something like being an athlete to some extent.

You really have to sit down and read the whole thing, which has some good stories about La Monte Young, Marian Zazeela and a bunch of other people.

One other great part (of many): De Maria contrasts the camaraderie of musicians—”If they are listening to another musician, they’re happy if the music is right”—to the more intense competitiveness that tends to predominate among people in art. He likens it to some kind of pillow fight:

It’s more individual so that you have a sense of a hundred people each fighting each other in a sort of free-for-all with everybody blindfolded and swinging knives instead of pillows, you know. [Emphasis added.]

Here’s the full interview. And here’s a 1966 recording of the Primitives’ song “The Ostrich,” which is pretty great, though, from what I can tell, De Maria probably did not play on it.

Update, 1:30 p.m.: An earlier version of this article rather embarrassingly confused John Cale and JJ Cale.