Luckily, a company called O’Dea Design has created a couple of hideous chunks of matter that will enable you to blow a cool half a G for no reason. The devices perform the same charging function as the wire that comes with your phone for free. You can kill two birds that weren’t even bothering you with one stone!

The design company has created the two glorified doorstops so that modern art can collide with the world of “wireless induction charging pads” in a hot-glue-gun-fueled frenzy, according to the O’Dea website.

The first product is called the #concretecharger. Yep, it’s hashtagged. It “embeds an inductive charger and an NFC tag in a triangular hunk of concrete” — and this slab of uber-luxe sidewalk will run you $550, Wired reports. It can charge two devices at once, you see, so it’s worth it.

A second product, the #cherrycharger (ugh), seems to be designed for even dimmer consumers. It “looks like a wood-paneled Mac Mini” and is topped with felt, Wired reports. Felt. It’s a steal at $450.

Okay, yes, people are allowed to spend their money on what they want. But if you’re contemplating spending $450+ on something that performs the exact same function as a device you can acquire much more easily for less than $20, you just might have too much money.

But if you’re just dying for a useful “modern art” piece that looks like someone took a chunk out of the decor found in a college lecture hall, and takes up way more space than your current charger, go ahead and reserve a spot for this insufferable equipment. The joke will be on you when you have a $550 hunk of concrete propped next to your bed. 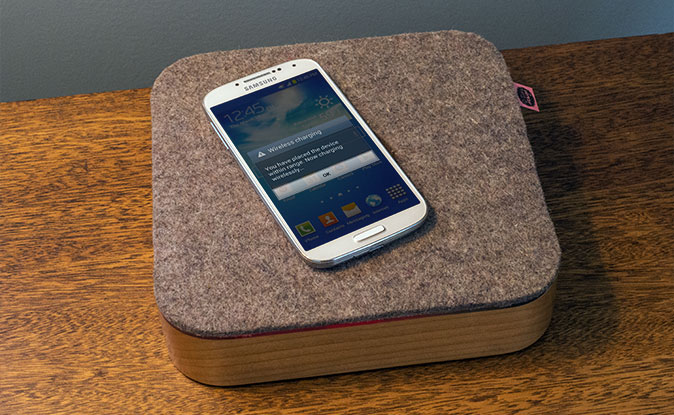