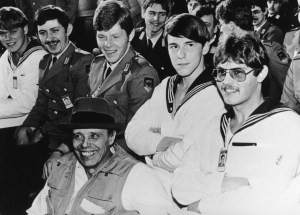 German artist Joseph Beuys (1921–86) among servicemen at the German ministry of defense, where he gave a lecture on his work, 1980. (Courtesy Getty Images)

Der Spiegel reports that a recently discovered letter raises further questions about the war record of Joseph Beuys, who once claimed that after his plane was shot down over the Crimea during World War II he was rescued by Tartars, who wrapped his body in fat to help nurse him back to health. This was a lie.

The new letter, which Beuys sent to the family of his plane’s pilot after the man died in the crash, seems to imply that snowy conditions, not artillery fire, led to the crash.

Here’s something of a summary from the story:

“Beuys’ 1944 letter gives the impression of a person much like those featured in the TV series — someone who wanted to be a hero, but ended up being lured into something terrible instead. Beuys did achieve his dream of becoming a hero, but that would only come later, when he became a superstar of the modern art scene rather than as a soldier.

“And he achieved that in part because of the way he mythologized his past in the war and especially in Crimea: elevating himself from radio operator to dive-bomber pilot; making himself the victim of enemy artillery fire, although it was actually poor weather that brought his plane down from the sky; and transforming the people who pulled him from the plane’s wreckage into Tatar shamans, although his 1944 letter says they were Russian workers.”

It’s been suggested that Beuys’s fabricated biography might be part of his practice. Read the whole thing here.