The morning after Sam proposed to me last August during a trip to Cannon Beach, Oregon, we sat at breakfast and I stared at the sparkling diamond on my left hand. I sipped my coffee and occasionally shifted my gaze away from my ring, squealing to Sam as I looked around the restaurant at the mostly middle-aged couples eating their French toast and ordering orange juice.

I voiced my wish to be someplace gay. “What do you mean by gay?” Sam asked me, even though I was certain she knew what I meant. We were young brides-to-be and I wanted to giggle and lace my fingers through hers and tell every single person who crossed our path that we were engaged, that she’d had this stunning ring made just for me, and that she wore a diamond in her ring that had belonged to her mom. The girl I loved wanted to marry me, and I wanted to celebrate.

Before we boarded our flight home to New York, I purchased my first bridal magazine and stashed it in my carry-on. As soon as our seatbelts were fastened, we leaned over my tray table, poring over images of burlap and lace. “I like that table runner,” she’d say. “I love wildflowers,” I’d croon. Without thinking of ours as a lesbian wedding, we let our imaginations guide us.

As we discussed a rustic venue over a city wedding and I insisted to Sam that she was absolutely not riding into the ceremony on a horse, we realized that the stress of planning a wedding would actually have very little to do with ours being a same-sex affair. While the lesbian element would captivate many of our friends and family, it was merely an aside for us.

Still, we wondered, when it came time for couples like us to enter the very traditional world of wedding planning, how were we to toe the line between customary and contemporary? There were no lesbian couples in that bridal magazine, and few to be found on the wedding blogs I later perused for hours on end.

Many of our choices were conventional, and the logistics were essentially the same as any other wedding: we would need centerpieces, music, a menu and a theme for the after-party. Our band wouldn’t need to alter their song list to accommodate lesbians, and dessert could still be wedding cake. When we decided on Thailand and Vietnam for our honeymoon, Sam read to me from her travel book that many women in Thailand hold hands as a sign of friendship. “Just don’t kiss me,” she joked.

The one thing that proved especially tricky for us was the question of a name change. Many of our gay and lesbian friends plan to take one partner’s name or hyphenate both. Though Sam and I each hold our surnames dear, we don’t love the idea of our future children having two moms and a last name like Semon, Goettlich, or some version of the two. After much discussion, we settled on Sam’s middle name, Abby, as our new surname.

As our friends and family approached me with questions about lesbian wedding etiquette, I felt like the spokeswoman for gay brides, except I didn’t know if any of my answers were the right ones. “Who walks down the aisle?” they would ask as we shrugged and replied, “Both of us.” “But how?” they would ask. We’d shrug. “Okay, well who goes first?” That question led us to the realization that neither one of us wanted to wait up front, like a groom, for the other. We could have two aisles, we thought, but this idea was met with more questions. “But then who are we supposed to look at if you’re both walking at once?”

There have been awkward moments throughout the planning, most of which have been amusing rather than hurtful. At one appointment, a stylist asked if mine was a “double wedding” when I told her there would be two brides. Our hair and makeup contracts list one bride and an extra member of the bridal party. We have each been named as a groom on various agreements and signed deposits. When a stranger compliments my ring and insists “He did a great job,” or an acquaintance asks about my fiancée, “What kind of work does he do?” I feel the added emphasis when I begin my reply with: “She …”

Planning a wedding with Sam this year has been special because not only do I get to marry the person I love, but we’re celebrating a historical moment together. I’m referring, of course to June’s landmark Supreme Court decision, which extended federal benefits to married same-sex couples. Our goal is to acknowledge it—and those who paved the way for weddings like ours—without suggesting that it was politics rather than love that drove us to the altar. We’re still figuring it out, but this I know: Even if my fiancée and I didn’t set out to become spokeswomen for lesbian brides, right now is an incredible time to be one. 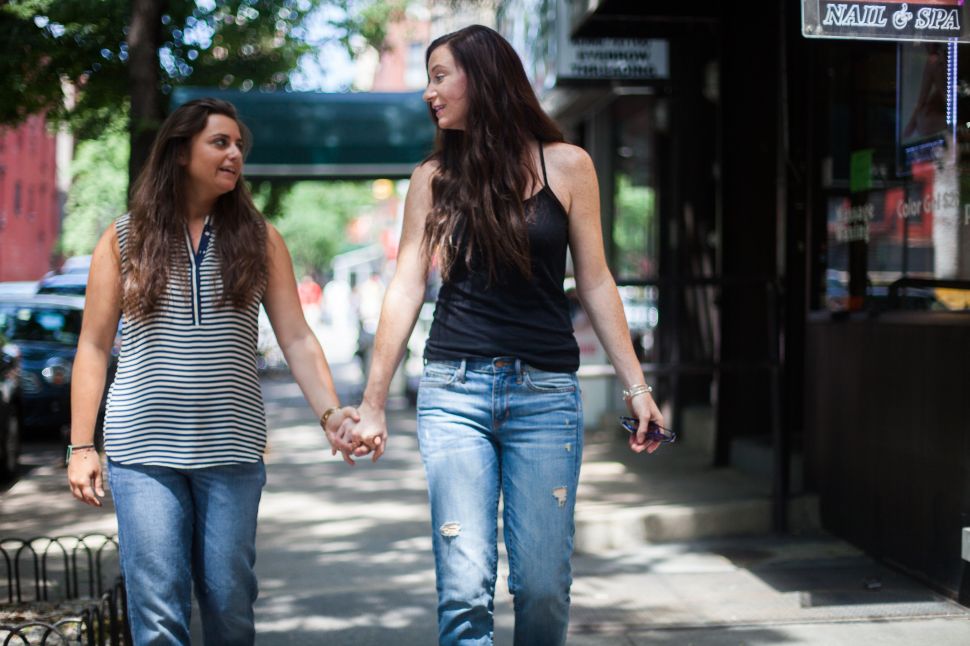