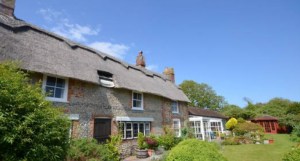 If you’re in the market for a quaint cottage, William Blake’s home in Felpham, England, is now on offer for £650,000, or about $970,000. The house, where Blake lived for three years at the beginning of the 19th century, is set in a walled garden, according to realtor Jackson-Stops & Staff, and has four bedrooms and two bathrooms. From the photos, which are available on Jackson-Stops’s website, it looks like a real beauty. (Thanks to Observer art critic Maika Pollack for tipping us off to the news.)

Felpham’s government website proudly notes that Blake once declared the village “a dwelling place for immortals.” He also penned a fairly strong endorsement in another poem:

Away to sweet Felpham for heaven is there:
The Ladder of Angels descends through the air
On the turrett its spiral does softly descend
Through the village it winds, at my cot it does end.

However, he did not exactly enjoy a worry-free stay there. He disliked his patron at the time, the poet William Hayley, who had asked him to illustrate his poems, and at one point he became involved in an altercation with a soldier who accused him of cursing the king, though he was eventually acquitted. Hopefully you’ll have a better time there.