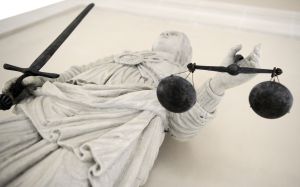 A picture taken on February 8, 2011 in Rennes, western France, shows a marble statue representing Themis, the Goddess of Justice at Brittany parliament, headquarters of Rennes appeal court. Rennes appeal court magistrates announced the adjournment of non-emergency hearings until February 10, 2011 evening during a social movement that followed French President Nicolas Sarkozy claim last week that their incompetence let a repeat sex offender allegedly murder and dismember a teenage girl. The French magistrates’ union called for courthouses across the country to go on strike until February 10 in protest, while two major police unions accused the president of using the murder to further his own right-wing political aims. AFP PHOTO DAMIEN MEYER (Photo credit should read DAMIEN MEYER/AFP/Getty Images)