From Rockefeller Center to Madison Square Park and the Park Avenue median, public art has become increasingly prominent around New York. Among the memorable projects in recent years were Christo and Jeanne Claude’s The Gates winding through Central Park, Olafur Eliasson’s New York City Waterfalls edging the lower harbor, and Tatzu Nishi’s Discovering Columbus, a living room constructed around the column-top statue of the explorer at Columbus Circle, a hot ticket earlier this year. Thanks to nonprofits including the Public Art Fund and Creative Time, these and other temporary installations provide aesthetic enjoyment and edification to residents and sightseers, and do so free of charge. Their presence reflects the ethos of a sophisticated democratic city that prides itself as the world leader in cultural vibrancy and innovation.

But the roster of public art venues can hardly be considered a glut. Indeed, there is ample room for growth, and at least two spaces ideal for the purpose are currently overlooked. The Metropolitan Museum of Art should launch a series of contemporary art commissions to occupy the empty plinths on the museum’s Fifth Avenue façade. Which plinths, you ask? The two recesses flanking the main entrance, level with the top of the great stairs, directly below the north and south arches of the portico. It may be tough to picture them at the moment, while the Met’s frontage is partly obscured by construction siding, but each plinth is, in fact, a little stage, about 35 feet long, 15 feet deep and as high as the entire façade—large enough to exhibit a variety of temporary art projects, whether traditional statues, decorative assemblages, conceptual installations, performances, sound pieces, LEDs, video works or whatever contemporary artists dream up.

A similar program in London has been a great success. Since 1999, the so-called Fourth Plinth has presented nine commissioned works atop an unadorned stone pedestal in Trafalgar Square, in front of the National Gallery. The vacant platform has carried a life-sized figure of Christ (by Mark Wallinger), a replica of Admiral Nelson’s flagship Victory in a huge cork-stoppered bottle (Yinka Shonibare), a sculpture of a boy on a rocking horse (Michael Elmgreen and Ingar Dragset) and 2,400 members of the public who for an hour each stood still as statues (Antony Gormley). The current display is a striking 15-foot-tall electric-blue cockerel by Katharina Fritsch that visitors say adds a welcome touch of humor and interest to the staid surroundings. The Fourth Plinth—the three others carry commemorative bronze statues—has proved a popular attraction for Central London, and the Met’s Fifth Avenue façade series would be no less an enhancement to Museum Mile.

The Met has ramped up its exhibition program in contemporary art, including the roof garden series that has included hits like Roxy Paine’s steel tree-form Maelstrom and the Starn brothers’ climbable scaffold Big Bambú. There is considerable anticipation about the Met’s future contemporary programming in the Whitney Museum’s building on Madison Avenue, which the Met has leased for eight years beginning in 2015, when the Whitney decamps to its new home in the Meatpacking District, and the Met commences renovation of its 20th Century wing.

The façade series would be a billboard for the Met’s ambitions in contemporary art, enhancing the institution’s aura of relevance, and adding art to the otherwise stolid façade, announcing to visitors and passersby alike that the Met is in the business of aesthetics and ideas, and that it seeks to engage one and all. The series could also serve as a billboard for philanthropists, foundations and corporations willing to foot the bill in exchange for association with a high-visibility program at the preeminent art museum.

The proposal could be incorporated into the ongoing refurbishment of the museum’s Fifth Avenue plaza that stretches from East 80th to 84th Streets. The plaza features two large fountains and numerous trees, none of which interferes with sight lines to the plinths on the portico. The museum must take into consideration powerful neighbors who oppose intrusions into the tranquility of the Upper East Side. But residents need not be concerned—projects could be installed and removed quietly at night (unless witnesses are desired by the artists), and could conform with all city ordinances for pollution, safety and so forth. The series would enhance the appearance and interest of the streetscape, and in any case, the projects are temporary.

In the 1960s the Upper East Side and 57th Street were the epicenter of contemporary art in the city, later displaced by Soho and then Chelsea. But as downtown rents rise many contemporary art dealers are returning to the Upper East Side. Longtime denizens such as Larry Gagosian and Michael Werner are now joined by Hauser & Wirth, Robert Mnuchin, Luxembourg & Dayan, Per Skarstedt, Jack Tilton and Adam Lindemann’s Venus Over Manhattan, among others, and Dominique Lévy and Emmanuel Perrotin and will soon open galleries in a former bank on Madison Avenue and East 73rd Street. The Metropolitan’s plinth program would complement the commercial revival of contemporary art uptown.

Atop the Met façade, above the paired columns of the portico, are stacks of ashlars intended as raw material for allegorical statues planned for the entablature. Architect Richard Morris Hunt envisioned figure groups representing the “four great periods of Art” (ancient, classical, Renaissance and modern), but funding ran out when the stock market crashed in 1901, before the statues were carved. The piles of stone blocks remain a bizarre anomaly in the otherwise classic refinement of the Beaux-Arts façade, though I like to see them as emblems of the ongoing project of art—within the museum are the finest achievements of culture, but future achievements are yet to be accomplished. The façade series would provide the public with living examples of this unending quest. It would enliven the Met, its plaza and the public.

Jason Edward Kaufman is a New York-based arts journalist and critic specializing in museums and the international art world. 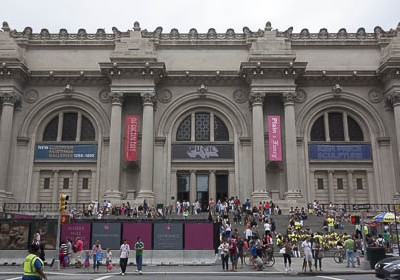