Former Congressman and mayoral contender Anthony Weiner went after what he described as “policy jihadists,” the media and his opponents in an extended barroom interview this evening with BuzzFeed’s Ben Smith.

The sit-down, which spanned from serious to silly, gave Mr. Weiner–nursing a non-alcoholic milky-looking beverage to Mr. Smith’s beer–a rare chance to talk about something other than the sexting scandal that has consumed his campaign in recent weeks, sending his poll numbers plummeting.

Mr. Weiner acknowledged the coverage in recent weeks had been “fairy brutal,” and expressed hope he’d bottomed out in the polls one month before the Democratic primary. Still, he continued to lash out at the media, criticizing the tabloid press for zeroing in on the color of his pants instead of policy proposals.

“You can do this or show videos of cats, whatever you do at BuzzFeed,” he joked at one point in a jab against his host, drawing laughs from the young crowd sipping free beers inside the Ainsowth, which had been transformed into a mini TV studio, complete with fancy set.

But his harshest words were directed at the New York Times, which he singled out as “lazy” for underselling his Congressional record and generally hammering his campaign. “The New York Times--wait for it–doesn’t want me to win. Their heads are exploding over the idea,” he said at one point, stressing the fact that he has no interest in courting their endorsement. “I do not care. And it makes them nuts that I don’t care.”

To demonstrate the extent of his indifference, he took a personal shot at the paper’s publisher, Arthur Sulzberger: “I couldn’t pick him out of a lineup.” he remarked. “He’s alive, right?”

In a more personal exchange, Mr. Weiner said his wife, Huma Abedin, a close aide to Hillary Clinton, continues to help with his campaign “every day,” but acknowledged the toll his actions had taken. “It’s hurt her professionally, it’s hurt her personally,” he said. For the first time, he further revealed that he knew what role Ms. Abedin would play on Ms. Clinton’s 2016 campaign–but refused to show his cards.

He also acknowledged for the first time that–while the messages were not sexual–he continued his relationship with sexting pal Sydney Leathers into April of this year.

“There are messages that were completely, you know, ‘How you doing?’ ‘What do you think of this?’ You know, I treated her like a friend. That was what I did,” he admitted. “But in terms of anything inappropriate, it was a year ago.”

Mr. Weiner was more vague on details, however, when it came to questions about whether he remained in therapy. “You know apparently you never go out of therapy. It’s like they just have this thing where you just remain in forever,” he joked. Pressed for specifics, Mr. Weiner said he does see a therapist “from time to time,” but that it was “tough on the campaign trail.”

Of course, given the setting, the evening was also filled with a couple of more whimsical queries–including perhaps the first curse word of the debate circuit, as Mr. Weiner recounted what he now says was a joke about wanting to rip out all of the city’s bike lanes the day that he takes office. He also went after what he described as “policy jihadists” who aren’t open to compromise when it comes to topics like bike lanes.

Mr. Weiner said he wasn’t sure why he hadn’t used SnapChat–a service that allows users to share racy pics and immediately destroys the evidence–and said he had yet to consider whether the tablets he wants all kids to use as schools should be barred from accessing programs like SnapChat ad Facebook.

But asked whether he intended to live in Gracie Mansion, Mr. Weiner was far more certain. “Hell yeah!” he told the audience. “Of course.” 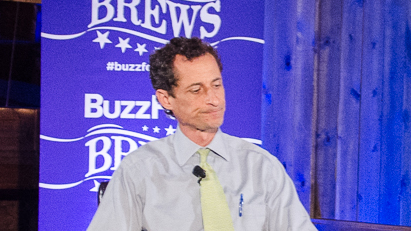