Just in case it wasn’t already clear from the barbs on his Twitter feed, Deputy Mayor Howard Wolfson is not a fan of Bill de Blasio’s vision for the city.

During an appearance tonight on NY1, the man who has become the mayor’s chief mouthpiece continued to dig into the sudden front-runner in the mayor’s race, doubling down on previous criticism and accusing the city’s public advocate of flip-flopping on term limits.

The attack comes as various forces are ramping up their efforts to halt Mr. de Blasio’s unexpected gains in the polls with just two weeks to go until the primary.

Mr. Wolfson began by defending a recent tweet that summed up Mr. de Blasio’s agenda as “higher taxes, bigger govt, more biz mandates. A u-turn back to the 70s.” He said that, while Mr. de Blasio might disagree with the “phraseology,” there’s no doubt that Mr. de Blasio wants to reverse course on the Bloomberg years.

Later, Mr. Wolfson attacked Mr. de Blasio for changing his mind on term limits, saying that he had been personally confused by Mr. de Blasio’s change of heart since 2005.

“Consistency on the campaign trail is important. I have been confused as a voters, as a citizen, about his position on term limits,” Mr. Wolfson said, echoing a recent talking point used by de Blasio rival Council Speaker Christine Quinn’s campaign. When Mr. de Blasio ran for speaker in 2005, Mr. Wolfson said, he “was very clear that he wanted to overturn term limits and that he wanted to do it legislatively.”

“So I’m confused as to how somebody who had that position in 2005 now running for mayor has a different position and says what we need to do is criticize others for changing term limits,” he added. “That does not make sense to me, and I find it confusing in the context of the campaign that he’s using this as a primary means of attack, mostly against my boss.”

But Mr. Wolfson, all too inclined to rip into Mr. de Blasio on his policy agenda, side-stepped the question.

“You now, I’m not gong to criticize his tenure on the campaign. I enjoyed working with him on that campaign. He and I are friends,” he repeated several times, before concluding that Mr. de Blasio is “a good guy.”

Mr. de Blasio’s spokesman did not immediately respond to a request for comment. 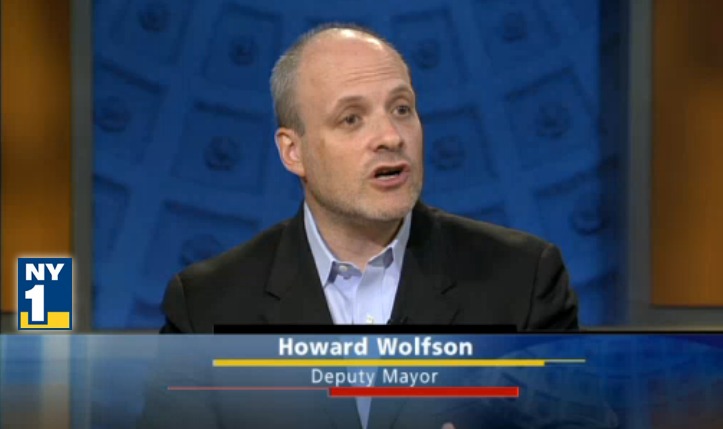