The candidates for Queens borough president faced off in their first major televised debate earlier tonight on NY1, discussing the future of Willets Point, stop-and-frisk and the lasting controversy over term limits.

But the most heated moments came as the participants were invited to ask questions of one another near the end of the debate.

In particular, City Councilman Peter Vallone Jr. dug into State Sen. Tony Avella, hitting him with a kitchen sink’s worth of accusations.

“You spent your career ignoring the people on the street,” charged Mr. Vallone, who criticized Mr. Avella for wanting to end the NYPD’s controversial stop-and-frisk tactic and accused him of supporting a massage parlor he described as “a seedy hotel which is known for prostitution” over the objection of the local community board.

But Mr. Avella hit back, accusing Mr. Vallone of insulting the Korean community and the hotel’s owner, whom he insisted was not involved in any crimes. “He’s an honest Korean businessman who you just defamed and you should be ashamed of yourself,” he chided.

“Don’t lie to the people! I’m not going to let it happen,” interrupted Mr. Vallone. “That’s an absolute lie. And you know it …. You were the one who pandered to the community and said, ‘We’ve got to end-stop-and-frisk’ in order to get applause.”

Mr. Avella tried to interject, saying he’d always been against stop-and-frisk–but Mr. Vallone wouldn’t give up the mic.

This was hardly the first time Mr. Avella and Mr. Vallone, both Italian-Americans whose constituencies likely overlap in the race, have squabbled. (Although it’s worth noting that Mr. Avella has raised far less money than the other two Democratic candidates in the race and faces an uphill battle to the nomination.)

Earlier, former Councilwoman Melinda Katz, who is running with the support of the county’s Democratic organization, also butted heads with Mr. Vallone, after she questioned his decision to seek the line of the right-leaning Conservative Party. Was that part of the reason, she asked, why Mr. Vallone had failed to draw many electeds’ endorsements?

“You’re the county candidate, you’re the machine candidate. I’m the independent candidate, so the elected officials go with the machine,” shot back Mr. Vallone, who explained that he, too, disagreed with many of the party’s platforms.

“I’ll take support from almost anyone and it doesn’t mean I support every position they have,” he said.

Mr. Avella, meanwhile, stayed on the sidelines, passing up his chance to quiz one of his opponents. 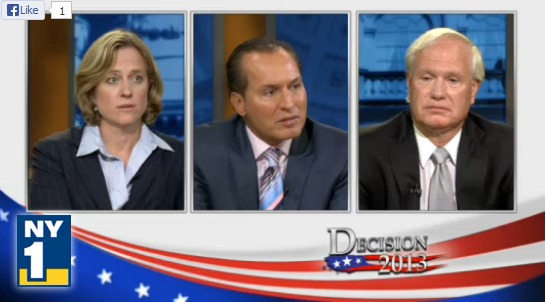