SECAUCUS JUNCTION – For the second time in as many weeks, Gov. Chris Christie stood shoulder to shoulder with a member of President Barack Obama’s administration.

The governor was in Secaucus Junction train station Monday to announce a state and federal partnership that he hopes will one day take the vital transportation hub “off the grid.” New Jersey and the U.S. Department of Energy are exploring designing a “microgrid” that would power Garden State transit systems between Newark, Jersey City and Hoboken in the event of future major disasters.

“It’s a big day for the state of New Jersey, working in partnership with the Obama administration, we’re taking a giant step toward constructing a smarter, more resilient energy infrastructure,” said Christie, who stood beside U.S. Energy Secretary Ernest Moniz.

“Today is a prime example of how federal and state agencies can work together,” Christie added.

The news conference was to announce the signing of an agreement for state and federal agencies to collaborate with Sandia National Laboratories to study and design a microgrid dubbed the NJ TRANSITGRID.

The event came less than a week after Christie stood on a stage in Little Ferry with U.S. Housing and Urban Development Secretary Shaun Donovan.

The governor’s recent appearances with Obama administration officials isn’t without some discussion of topics the two elected officials of opposing parties don’t always agree on – particularly, Monday, on the subject of climate change.

“We also know that no single weather event can be attributed solely to the warming climate, but we do know is statistically more intense storms, sea-level rise, draughts and floods … are all part of a predictable pattern of global warming effects,” Moniz said.

The governor thanked the Obama administration official for his support and even turned to one of his favorite punching bags who sat in the crowd facing the stage a few rows back – Sen. Nicholas Sacco (D-32).

Christie thanked Sacco for attending the event and “showing his support, not only for his district, but also for the state in this important project.” 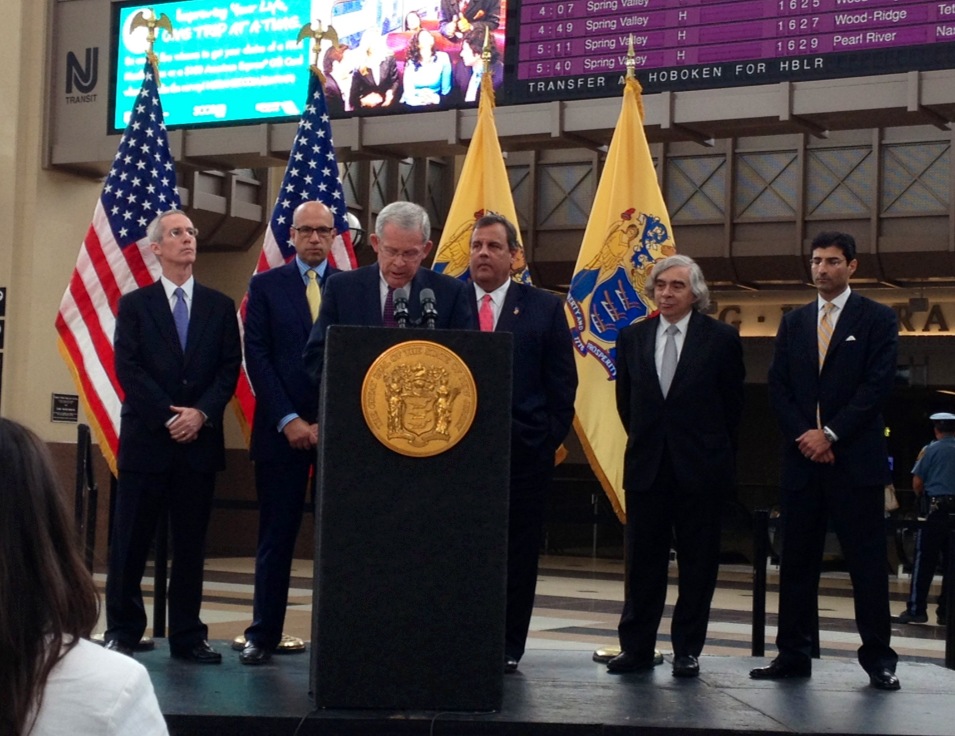