LONG BRANCH – Gov. Chris Christie is accusing a Democratic state assemblyman of being greedy and says the lawmaker is “only looking for money” in his refusal to sign an easement sought by a shore town.

The governor, during a press conference today, set his sights on Assemblyman John McKeon, (D-27),Tuesday, referring to him “as an assemblyman who’s putting his own financial interests ahead of the people he’s supposed to be serving” for being one of the handful of shore residents refusing to sign an easement for dune construction.

“I can only conclude he won’t give it out of greed,” Christie said.

“Now how are we supposed to stand up as state officials and say that everybody should sacrifice that little strip of land to build a high dune to protect our shore towns when a person who is supposed to be an environmentalist, who is supposed to be somebody who cares, due to his position as a member of the state Assembly about the whole state, and yet he won’t give an easement?” he continued.

The governor called on McKeon to sign the easement today and “set an example for the other 1,100 folks” who need to sign one as well.

The governor said the Army Corps of Engineers is ready to work on the Garden State’s coast but is hampered by the more than 1,000 residents he says are putting their neighbors at risk of future flooding because of their fears of losing an oceanfront view. 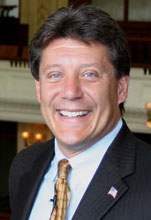