FLEMINGTON – The central portraits on the wall told the story.

This was the headquarters of the Hunterdon County Republican Party, where lurching rightward in recent memory has meant political self-preservation for those jittery electeds of the rural variety more easily identifed with Robert Lowell than Ronald Reagan.

Ever since movement conservative state Sen. Mike Doherty (R-23) beat Marcia Karrow and U.S. Rep. Leonard Lance (R-7) found himself in a competitive primary dominated by his aye vote on cap and trade, elected officials have taken heed – or paid the price.

A picture of former Freeholder Will Mennen also adorned the wall. He lost in a June Primary against an upstart ticket.

Irritated by the prospect of a third GOP Primary challenge from Tea Party businessman David Larsen of Tewksbury, Lance has taken on the role of elder statesman ally for U.S. Senate candidate Steve Lonegan.

“A person of enormous courage,” Lance roared in reference to Lonegan, who backed the then state senator in blocking then Gov. Jim McGreevy from borrowing to balance the state budget.

Right up front in the crowd and brandishing a Lonegan sign was Larsen, seemingly checkmated by Lance’s energetic advocacy of the U.S. Senate candidate.

Lonegan has solid credit here, having won in Hunterdon while losing statewide to Chris Christie in the 2009 GOP Primary for governor.

Appearing in the HQ with his campaign team retinue, Christie, say his critics, was no less in GOP Primary mode – of the national, not statewide, variety – as he formally embraced Lonegan today as he leads his own general opponent by over 25 points in most polls.

“I am proud to have him as our candidate for the U.S. Senate,” Christie said with Lonegan waiting in the wings.

They stood on the same stage on a buildup from Lance and Doherty, the power players in Hunterdon right now, as Christie officially threw in with Lonegan, who trails Christie’s professed “friend” Newark Mayor Cory Booker, the Democratic nominee for U.S. Senate, by 16 points, according to this morning’s Monmouth University Poll.

“My energy is just fine,” declared Christie. “This is not the only time we’ll be together. We’ll help him raise money.

“I know Steve is going to give Cory Booker some tussle over the next 60 days.”

“Let there be no doubt about that or about my energy for this endorsement,” the governor said in a packed room in the headquarters.

A gratified Lonegan stood beside Christie and acknowledged his one-time conqueror’s national aspirations.

“With this governor’s leadership, we will put not just New Jersey back on track, but we will put America on track,” the GOP nominee said.

“Just like Tea Party extremist Steve Lonegan, Governor Christie is anti-choice, anti-Planned Parenthood, anti-marriage equality, and anti-common sense legislation to reduce gun violence,” said Turner. “Their unabashedly conservative views are completely out-of-touch with most New Jerseyans. Seemingly, they want to bring the Garden State back to the 1950s. The Christie-Lonegan platform of yesteryear has no place in New Jersey and voters will soundly reject their extreme views in the fall.” 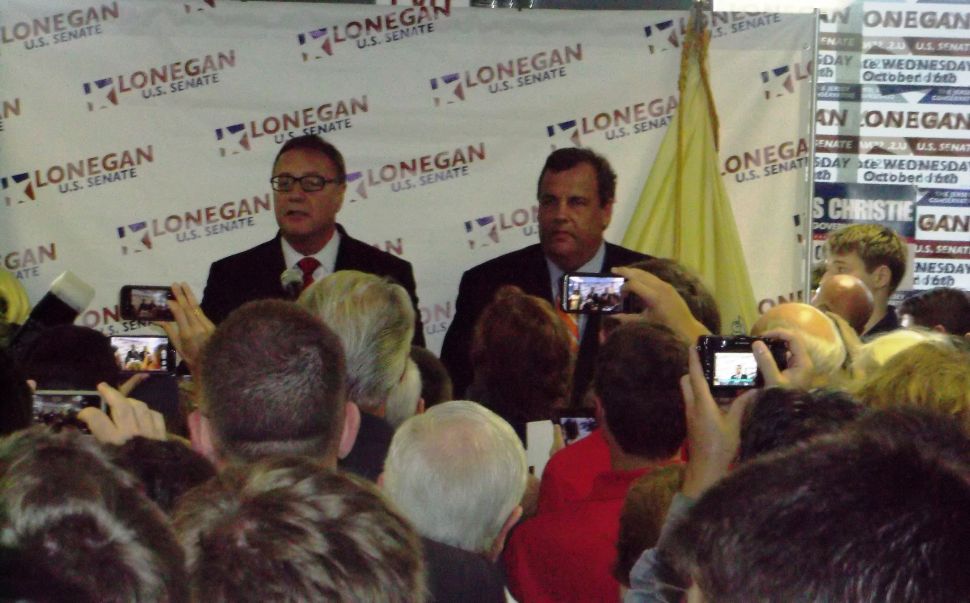