On Wednesday, nearly a third of the journalists at Cleveland’s main daily newspaper, The Plain Dealer, were laid off.

The Northeast Ohio Newspaper Guild Local 1, the sector of the Communications Workers of America union which represents workers in The Plain Dealer’s newsroom, told The Observer that either 47 or 48 people lost their jobs, leaving only 110 employees left in the newsroom. Although the union declined to release their names, an unofficial “PD Hit List” has circulated online.

Rollie Dreussi, the executive secretary of the Guild, estimated that two-thirds of the laid off employees had been with The Plain Dealer for more than 15 years and were mostly middle-aged. About half of them, including Guild president Harlan Spector, volunteered to be laid off—or “separated from employment,” to use Advance’s preferred euphemism—to ensure that some of their colleagues would keep their jobs.

Those who did not volunteer found out their fate Wednesday morning. An email sent out the previous night had instructed reporters to wait for a phone call between 8 and 10 am—a call that would either inform them they had been let go or request that they come into the office for work.

The journalists who were let go—or “separated from employment,” to use Advance’s preferred euphemism—will receive two weeks’ pay and two weeks’ health care for every year they worked at the Plain Dealer, plus a bonus of another three week’s health care or $2000.

The layoffs are all part of Advance’s “digital first” strategy, which involves laying off veteran journalists and cutting newspaper delivery to three or four days a week. The Plain Dealer will now only be delivered to subscribers on Wednesdays, Fridays, Saturdays, and Sundays. Meanwhile, a new (non-union) media company called Northeast Ohio Media Group has been created to run the website Cleveland.com, which will be “powered” by The Plain Dealer’s journalism.

Plain Dealer reporters will work alongside Northeast Ohio Media Group reporters to produce content for the website, some of which will then make it into the no-longer-daily print paper. Advance has already tried this strategy with other regional papers, including New Orleans’s Times-Picayune and The Oregonian.

Advance’s plans for The Plain Dealer were (unsuccessfully) opposed by the “Save the Plain Dealer” group, which was led by Plain Dealer journalists and supported by the Guild. The group held a protest rally after the layoffs were announced and then organized an “Irish wake” for laid off journalists at a local bar.

“The dismissals were unnecessary,” the group wrote on Facebook. “They were driven by greed, fear and a disastrous inability on the part of the newspaper’s senior management and billionaire owners to creatively respond to the challenges facing journalism in the digital age.

“The layoffs will irreparably damage the community,” it added.

The group cited two main concerns about what the layoffs will mean for the future of news gathering in Cleveland.

One is about the accessibility of web access. Many Cleveland residents—more than half of African-American and Hispanic adults in the region, according to one survey—lack broadband Internet access and therefore will be unable to read the paper every day. The other worry is that a diminished newsroom tasked with increasing page views will be unable or unwilling to do serious investigative, muckraking journalism.

If there is a silver lining, it’s that the remaining 110 journalists have relatively strong job security. The Guild negotiated a contract extension with The Plain Dealer’s parent company last year, winning a contract extension through 2019 in exchange for accepting the layoffs. There is one more round of layoffs scheduled in 2015, when the company will be allowed to “separate from employment” another five staffers. But everyone else is safe for the next six years, as long as The Plain Dealer continues to publish a print newspaper at least once a week.

What about after 2019? “You know better than me,” Mr. Dreussi said. “My expectation is that The Plain Dealer is still a viable news operation, and we’ll do another contract. Obviously, the newspaper industry is going to be very different.” 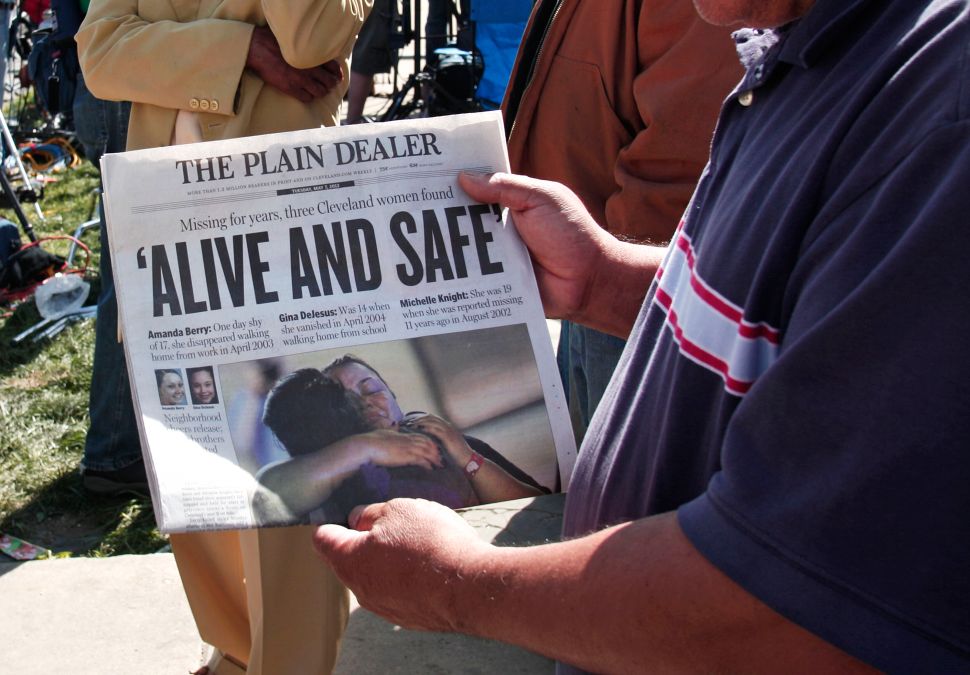