It’s good to be back home, or at least in your former City Council district.

Bill de Blasio took his mayoral campaign down a busy business strip in the heart of Brooklyn’s Orthodox Jewish community this afternoon, where he was warmly received as he hugged babies, schmoozed with voters and listened to the concerns of small business owners.

And along the way, he frequently pointed out that he used to represent a sizable slice of the Boro Park neighborhood before he was elected public advocate in 2009.

“My trash cans are still here!” he exclaimed excitedly after stumbling upon a waste depository bin still brandishing the name of a Council Member Bill de Blasio. “This is evidence. This is a historic memorial of when I represented this part of the district. This is my idea of a great monument.”

Mr. de Blasio found himself in more familiar territory when he walked into nearby Amnon Kosher Pizza. “This is the finest kosher pizza in Brooklyn,” he asserted once inside. “I insist that the media sample and see if I’m right.”

Amnon Levy, the pizzeria’s owner, told Politicker he was a big supporter of Mr. de Blasio, who has promised to rein in restaurant violation fines. But he also admitted he liked rival candidate Bill Thompson, a former city comptroller who is making a big play for the Orthodox Jewish vote in his own bid for Gracie Mansion. “Whoever is going to be elected, I say, ‘Long live the king!'” the owner declared. Mr. Levy let out a loud groan when asked about the third leading Democratic candidate, Council Speaker Christine Quinn.

“He was a councilman on this side of Boro Park. He was very nice to us,” Mendy Israel, who walked with Mr. de Blasio for a leg of the trip, told Politicker.

“He’s a mensch,” concurred Yiddy Schwartz, who didn’t elaborate on the specifics but was confident in her conclusion: “I know what he stands for and I like what he does.”

Of course, Mr. de Blasio’s appeal in the relatively conservative Orthodox Jewish community could be limited by his self-proclaimed status as the most liberal candidate in the race. During Mr. de Blasio’s scrum with reporters, for instance, one heckler castigated him for his endorsement from billionaire philanthropist George Soros, whom some view as anti-Israel.

And before Mr. de Blasio arrived, one aide debated an older woman about the candidate’s lefty position on stop-and-frisk, which Mr. de Blasio regularly touts as the clearest difference between himself and his rivals. But the woman, adamantly in favor of the controversial police tactic, could not be swayed.

“Look, there’s a lot of issues,” the aide finally offered. “I hope you think about it. Think about it over Rosh Hashanah!” 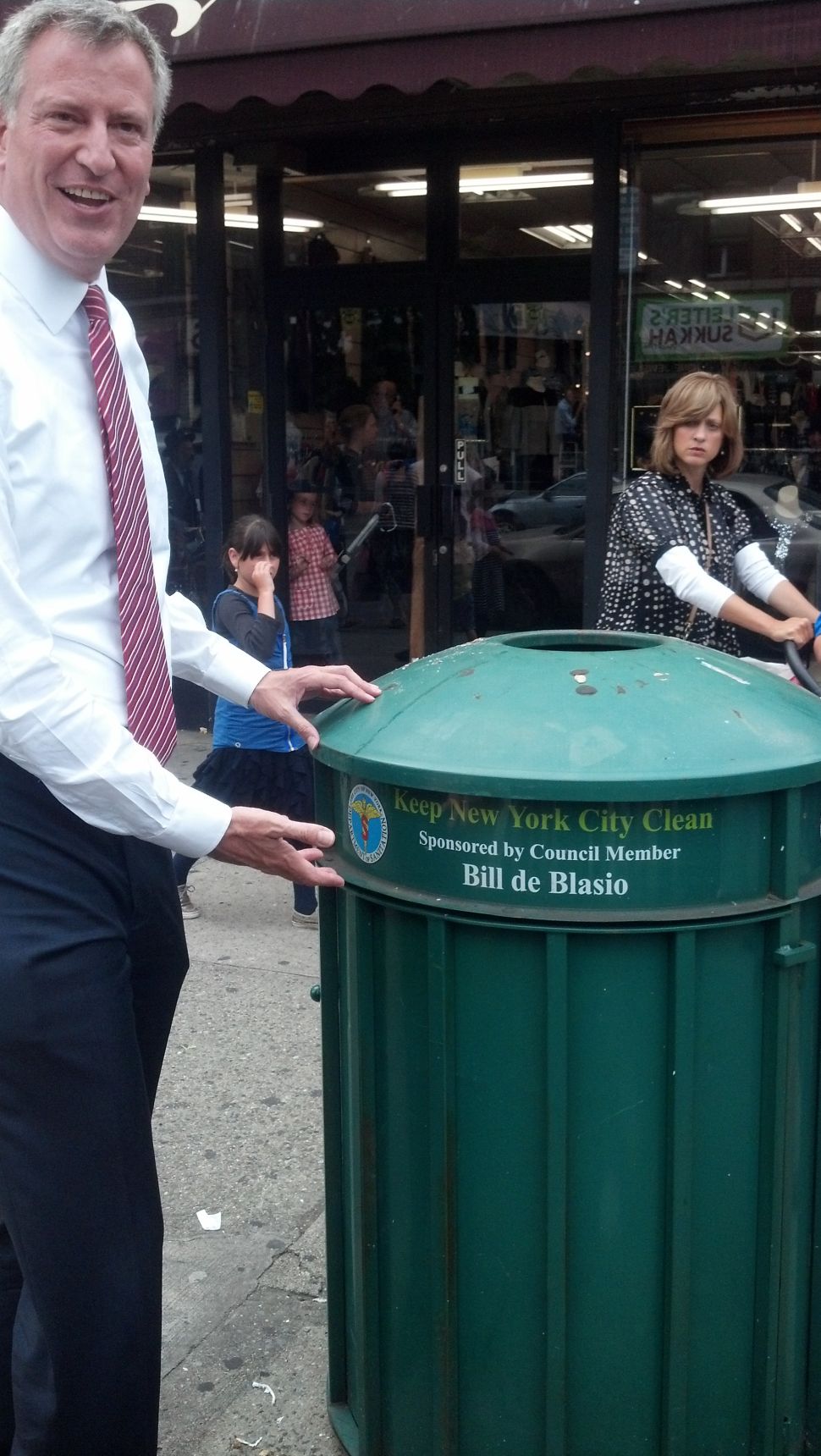