Kenny Schachter is a London-based art dealer, curator and writer. His writing has appeared in books on architect Zaha Hadid, and artists Vito Acconci and Paul Thek, and he is a contributor to the British edition of GQ and Swiss money manager Marc Faber’s Gloom Boom & Doom Report. The opinions expressed here are his own.

In Zurich with a few extra hours to kill on a Sunday—what to do? Kunsthaus Zurich, of course. Why not make the best of the day with a dose of predominantly white, male European and American masters in the city’s museum for modern art?

Admittedly, the art I typically consume requires a price tag to draw me. Visiting a museum can be like reading a history book: I need to be teaching a class for the impetus to do it.

But the exhibition on view was powerful enough to slice through my hesitance. Here was a group of abstractions soon to be donated by retired Swiss entrepreneur Hubert Looser, a slew of de Koonings, Twomblys, Kellys, Rymans and more.

The 20-minute queue to get in was heartening as an indication of the fevered temperature of art today. That is, until I was rudely informed of the 25 CHF required for an all-access pass. Then again, how else can you attain such a kick of immediate gratification for what amounts to $27.09 (at present exchange rates)? Chocolate, music, a great movie—drugs?

First up, a bit of the permanent collection housed in the Giacometti Rooms—and there are many—served up a dose of Picasso, obscure Bacon and others. You have to love this country. Upon exiting the galleries, I repeatedly murmured under my breadth, ‘Thank you, thank you, thank you,’ to the point that I suspect security guard was about to call for back-up support.

Then it was on to the Looser holdings. After he attained a certain plateau of success, Looser strove to transform his money into art, and according to a recent article on Bloomberg, he informed his children that the collection was cultural goods to be forfeited to a public institution rather than inheritable wealth. (If I told my kids that, I’d end up in the basement chained to the radiator for a few years.) His collecting career came to a halt because he grew tired of “haggling with dealers,” which, I can tell you, can also amount to an enjoyable contact sport. I think he was weary of the game, which is, admittedly, exhausting, confounding and strenuous. (I actually slipped a disc lifting an Ai Weiwei ceramic stool once.)

First up is a wicked—both literally and in the kid-speak sense—pair of Willem de Kooning canvases dating from 1970–71, both untitled women that have the pent-up energy of a deranged adolescent about to bolt off the canvas and charge at you. How he physically engaged with the paint!

Then there are quite a few later de Kooning paintings that were initially seen as products of a mind succumbing to dementia, rather than for what they are: great artworks in their own right. I understand them as a release from all of the violence and aggression of his earlier works, possible only once he had accomplished what he set out to do at the outset of his career, which was to change the course of painting, to make history. In all, I find the later works like a great exhalation—a sigh of relief after a life and career well spent.

Moving on through the galleries, I came to Cy Twombly—sculptures and paintings by the mile. One stunning work dating from 1960 has his signature wobbly text rendered in pencil: “Queen for a Day.” How I wish I could have been Twombly for a day. He seemed to have never left the sandbox throughout his entire oeuvre. There was another work that was so cracked the paint looked as though it was going to slough off the canvas like decaying skin onto the floor; for the sake of Looser, I hope it entered the museum that way.

When it comes to Robert Ryman, I can’t quite conjure the enthusiasm for the uniformity of the uniform. I guess I am too much of a Technicolor conceptual expressionist. There was, however, a nine-foot square (white, imagine that!) canvas with an 89 stenciled across the face of it that resembled the numbers splashed across a football jersey—it was actually quite cool.

Worse, for me, is Sean Scully, who’s ever repeating crisscrossing crisscrosses in the drabbest colors. They’re the art world equivalent of soggy Wonder Bread. Scully leaves a chalky, bland taste in my mouth on practically every sighting. More auspiciously, there was an elegantly sized, condensed Yves Klein that looked as if a hyperactive nude baby participated in one of Klein’s happenings and then–bang!—youth indelibly frozen, imprinted for eternity.

Past Looser’s lot, I did a drive-by through Old Masters en route to the museum’s permanent contemporary holdings, also nothing to sneeze at. I am not too proud to confess that Old Masters leave me cold. Sure, Rembrandt and Hals can be fun, but I just don’t have a visceral reaction to them.

So it was on to the contemporary galleries. Dieter Roth is a material poet of barely controlled oxidation and entropy; he touches me deeply with his sense of abandon and utter freedom.

Of course there has to be a substantial grouping of Urs Fischer works, the great Swiss hope. They are not altogether bad, other than a sophomoric skeleton sculpture. Please, can there be an international decree for a moratorium against any further skulls and bones in art for at least 10 years?

Next, (my) beloved Sigmar Polke. Dismiss Polke’s photographs at your own expense—they are profound, especially the hand-colored works from his trips to Afghanistan and Pakistan and the “Beggar” series he made in 1972 in New York, which are on display here. Viewing two oversized paintings on unconventional resin-like skins with inlaid wire mesh had me laughing out loud and moaning with joy. Polke’s paintings are orgasmic.

Joseph Beuys’s Olivestone is a beguiling grouping of large rectangular stones arranged tomblike, as if in a cemetery. The menacing rocks are precariously balancing on what appear to be mere pebbles. The tops of the stones and crevices running along the perimeter are saturated with oil, which produces a heady odor in the gallery. I am a sucker for art with a scent, even in the overbearing and serious form of the largely humorless Beuys.

Before I left, I strolled past the Picassos. Nothing more need be said on the hackneyed subject of Picasso other than that my hand began uncontrollably twitching at my side imagining how he applied his brushstrokes as I went through a roomful of late paintings.

I somehow managed to remember my umbrella on the way out, no mean feat given the ecstatic experience I’d just had. I should do this more often. 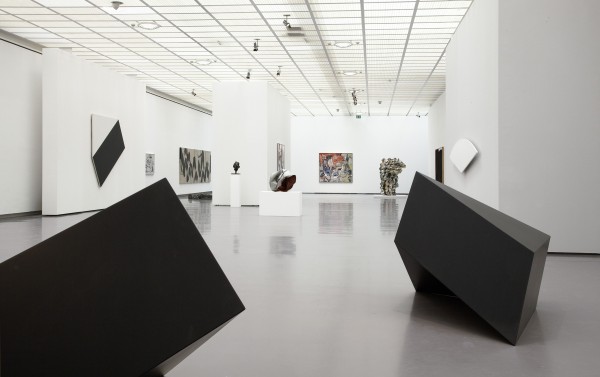