Some campaigns point to endorsements from powerful labor unions. Others tout backing from notable elected officials and political clubs.

“Council Member Gale Brewer has been known since she was elected to office, and even prior, for enlisting interns that could make US Senators jealous,” declared the release from her campaign. “During her tenure in the City Council, Gale offered countless internships in her district and city hall offices. ”

The release, entitled “SLEW OF FORMER INTERNS ORGANIZE FOR GALE BREWER FOR BOROUGH PRESIDENT,” then did the math.

“It is estimated that Gale has had several hundred interns during this time,” it read. ” After 12 years in the council that number could be as high as 1000.”

“When I started interning for Gale’s Council office the summer before my junior year of high school, I expected that I would be making copies and filing,” she said in a statement. “After all, what would a New York City Council Member want with someone who had almost no experience in an office let alone city government? But not only does Gale’s office assign interns important tasks that very quickly teach them what local government is all about, but Gale personally invests time with all of her interns.”

The former interns will host a “former intern organizing party” tomorrow from 8 p.m. to 10 p.m. on Ms. Brewer’s behalf.

It should be noted that Ms. Brewer has secured the endorsements of various political clubs and elected officials, including Assemblyman Dick Gottfried, in addition to her former interns. 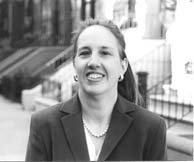