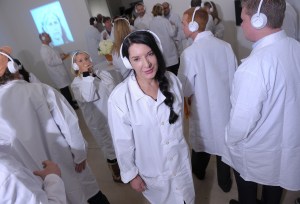 If you’ve been following the progress of Marina Abramovic’s Kickstarter, which aims to raise seed money for her Marina Abramovic Institute for performance art, you know that she’s been adding new rewards throughout the course of the Kickstarter. These have included an invitation to an event where she will hug you (“The Embrace”) for $1 and, just yesterday, a “movie night” with coffee and ice cream for $5,000.

The artist has been adding more and more rewards as the fundraising winds down and Gallerist can now reveal an exclusive preview at some upcoming rewards she’ll soon add to the Kickstarter page. Take a look!

Marina will give you a high five at a 2016 event that will take place
in either Schenectady or Asia known as “The Joining of Palms.” ($5)

Marina will do your laundry in an event known as “The Cleanse.” ($40/lb)

Marina will stage a marathon reading of John Grisham’s The Client. ($4,000)

Marina will start, and win, a fight with a giant chunk of crystal. ($8)

Marina will wake you up in the morning by banging pots and pans in an
event known as “The Schmuck.” ($20)

Marina will recite every line spoken by  Matthew McConaughey in the
movie Dazed and Confused. ($200)

Marina will let you do the “stop hitting yourself” thing to her. ($21)

Marina will perform the Abbot and Costello routine “Who’s on First?”
with James Franco. ($300)

Marina will teach you how to wait for a bus. But like REALLY wait for a
bus. ($50)

Marina will host you in a five-day intensive course that, with the
right amount of patience and effort on your part, will slowly teach
you the Abramovic Method of getting Lady Gaga to appear in a video for
something you’re promoting. ($200)