For the techies prowling around and anxiously consuming bagels on the second floor of the McGraw Hill building on Wednesday, today was the culmination of an entire summer spent programming their keen little faces off: finally, the Dreamit New York 2013 Demo Day had arrived.

Shortly, 15 budding startups—hand-selected by incubator Dreamit Ventures, and mentored over the course of the summer—would present their brainchildren to a roomful of potential investors. Thankfully, all we’d have to do was watch.

“The common thread is they are [all] exceptional teams,” said Mark Wachen, managing partner of Dreamit Ventures. Mr. Wachen personally read through a thousand applications to find the 15 finalists. “To us they had that spark. They all had that entrepreneurial drive.”

We checked out a few startups before the formal pitches began. There was CreatorUp, an e-learning platform that teaches businesses to make and market their own videos. Working with Dreamit for the summer had been “fantastic,” cofounder Mike Tringe told Betabeat, “We had guidance from beginning to end [and] consistent, quality feedback…It helped us think about how we present ourselves.” Then there was HeyKiki, a search engine that aggregates and rates local classes—like the Kayak or Expedia of piano lessons or yoga classes, if you will. The app also uses a special HeyKiki rating system to rank the search results.

Before the pitches, we also checked out TouchBase, whose technology may or may not be actual wizardry. A rep did a demo for us with an ad for The Heat, printed on a small piece of paper. He waved his smartphone over Melissa McCarthy’s face and—no QR code required—a trailer for The Heat instantly began playing on his screen. We elicited an honest-to-goodness squeal. Using something called conductive ink, his smartphone had produced a living, breathing digital advertisement from what appeared to be a very ordinary physical image.

At 10a.m., we moved into the auditorium for the official demos.

Juan Chaparro, who years ago worked with his wife as a house cleaner in Texas, and had to hitchhike from job to job because they had no car, began with an awesome heartwarming story. “We were full of dreams and wanted to make a big business,” he said. Today, Mr. Chaparro is cofounder and CEO of Serviceful—a “digital concierge” that books and manages all your home services, from pet sitters to gardeners to window washers. Talk about a success story.

There was also Israeli app Trippin’ In, whose cofounders met during a mutual stint in the Israeli Defense Forces. Self-described as “Nielsen, [but] for physical locations,” Trippin’ In analyzes social media gestures to determine which locations—be they bars, restaurants, or parks—are hot, and which are not, at any given moment.

Also from Israel was Mimoona, an app wherein fashion companies can show shoppers what they’re thinking about producing; if the items are well received, the fashion companies will actually make them. Put simply, it prevents fashion companies from making heinous sofa-cover dresses that nobody actually wants. Then there was Instrumagic, pretty much an iPad guitar for people who don’t have the finger strength or willpower to play an actual guitar. (Other cyber instruments are also included—sync your iPads and have a jam session, suggested the presenter.)

And speaking of learning stuff, TradeUp helps users find jobs by giving them a diagnostic test, and then determining how marketable they are, and which areas need improvement. wireLawyer is an online network for lawyers to share lawyer-y resources, designed to give small to medium-sized firms a competitive edge. Callida Energy lets building managers customize an energy plan for maximum cost efficiency and eco-friendliness.

The very cool Miner activates virtual storefronts based on your exact location—find a restaurant that’ll deliver a pizza to your exact seat in Yankee Stadium, for example. And if we’re on the topic of buying shit, Stylr, Inc. uses your geographical location to show you sweet fashion deals in nearby stores, as well as real-time inventory. Perkle—created by a plastic surgeon-turned-entrepreneur—connects non-profits with businesses whose special promotions help them raise charitable funds. Also dealing with non-profits was WeDidIt, a new online platform to help charities raise funds.

If we had to guess, the crowd fave seemed to be GamePress, an easy-to-use iPad app that lets users customize their own video games. Its presenter, Murtaza Sadaat, won big LOLZ with a videogame demo featuring a giant, evil baby’s head swinging into a building. We’ll take two!

After the pitches, we watched with Mr. Wachen as the eager entrepreneurs returned to the holding room, hoping to attract the interest of investors. “It’s really exciting to see a company come in, two or three people, with a lot of energy but no customers, and see them develop really rapidly…and [help] to change the world,” he said, “…Hopefully Dreamit gives them the rocket fuel to get to the next level.”

Honestly, we were just happy the word “disrupt” was only used twice over the course of the day. 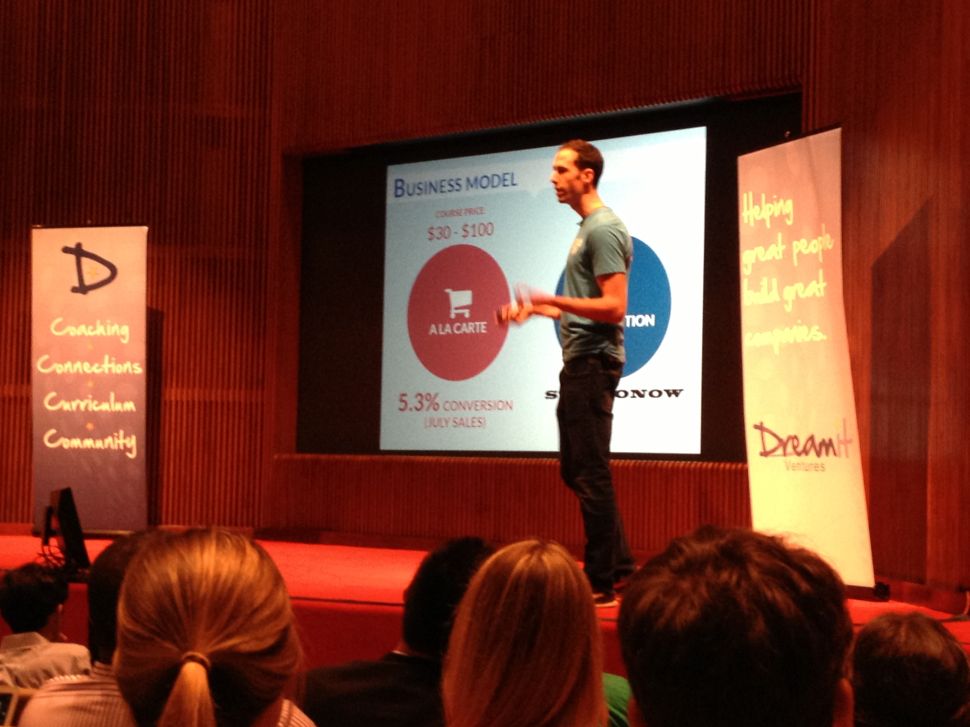