Earth, in Neill Blomkamp’s new science fiction thriller Elysium, set in 2154, is one big wretched slum: arid, diseased, dangerous and overcrowded. There is little hope for its denizens, though at least all are equal in their own miserable destitution. Until they look up.

Their poverty is thrown into sharp relief by a giant orbital space station visible high in the sky above them like some exotic moon, to which the ultra-wealthy have absconded. In this paradisiacal gated community writ large—it resembles an elaborate golf course, dotted with mansions, palm trees and other gold-plated trappings—the rich live extremely well.

Most of Elysium takes place in Los Angeles, a filthy hellhole of stacked homes and narrow streets patrolled by robot police. Max (a ripped, tattooed Matt Damon) is an ex-car thief who works at a factory. One day at work, he is exposed to a lethal dose of radiation and is told he has five days to live. Unless, that is, he makes it to Elysium, where the rich have developed tanning-bed-like contraptions that will cure any illness. Elysium, however, is assiduously guarded by the sociopathic defense secretary Delacourt (a cold-blooded Jodie Foster); a voyage into space is a death wish.

At this point, it’s worth noting that Elysium is the kind of movie to which Observer film critic Rex Reed would probably award zero stars, alongside an incendiary diatribe assailing the systematic dismantling of the intellect of a great democracy. But Mr. Reed is currently at the Toronto International Film Festival, so you’ll have to forgive my charitable assessment of this engaging and socially conscious picture.

You don’t have to believe that Mr. Blomkamp’s depiction of a not-too-distant future is accurate to spot the film’s thinly veiled allegory, which feels timely, if somewhat heavy-handed, in light of the global Occupy movement. But Elysium, an action movie through and through, never once becomes pedantic or contrived. It’s not out to teach you a lesson, and in that regard it has much in common with District 9 (2009), Mr. Blomkamp’s excellent debut feature, which indirectly addressed the issue of apartheid in South Africa, his homeland. Elysium, despite its ambitiousness, may be a lesser film than District 9—it doesn’t resonate quite as deeply—but its propulsive, unflagging plot makes it solid summer fare, and better than much of what has been in theaters lately in the blockbuster category.

As his organs begin to deteriorate, Max goes to a man named Spider (Wagner Moura), a kind of cyber genius who arranges covert trips to Elysium that—like a Cuban rafting to Florida—you are not likely to survive. Spider makes a deal with Max, who is told to hijack the valuable brain data of an Elysian citizen (they make business trips to Earth) in exchange for passage to the sky.

In order to perform this theft—which will be Max’s magnum opus—a strength-giving exoskeleton is affixed to his body and plugged into his nervous system. How someone who is dying from radiation exposure lives through such complex surgery is the kind of question that Elysium, with its invigorating pace, successfully elides. Like Max, the movie has to keep moving, and Mr. Blomkamp lets you fill in the gaps yourself as it progresses. Or not. His film never explains how the world got to be the way it is or how the rich made their way into space. But how much backstory do you really want in your summer action flick?

In the course of around 30 minutes, Max’s arm is broken, his bones are sawed, a car blows up while he is inside it, and he is stabbed in the stomach by a villain named Kruger (Sharlto Copley, the protagonist of District 9), whose mission is to procure the data that Max gets ahold of. Slapstick humor punctuates Elysium’s dire mood, and an undeveloped (and ultimately dispensable) love story gives some emotional depth to Mr. Damon’s stolid character.

Eventually (and unsurprisingly), Max’s mission becomes much larger than an escapade whose goal is saving only his own life. As happens when a hero wades into world-saving territory, the mood gets maudlin. And while the movie may not, in the end, be so effective in tapping into our current class anxieties, that hardly seems to matter. Like a trip to Elysium, it’s a wild ride. 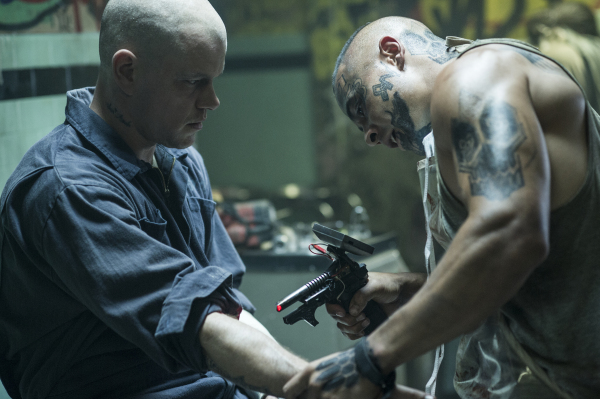