No? Well some guy did and ended up getting busted by the FBI for robbing $210,000 from Buffalo’s parking meters over a ten year spree. All in quarters.

Just in case you wanted to try your hand at replicating the criminal mastermind-ery of James Bagarozzo, we’ve compiled a handy list of how he went about it, so you can also try and make a fortune out of tiny little coins.

1. Become a parking meter mechanic. Sure, it might be boring as hell, but think about those couple of hundred grand! (That you probably could’ve earned honestly over the same period of time.)

2. Get an accomplice. Even the finest of criminal minds needs a sidekick, and you’re going to need a Robin to help you, quarter-Batman, carry all those coins. Why not get one called Lawrence Charles, just like Mr. Bagarozzo did?

3. Rig the crap out of them. Now, parking meter mechanics don’t usually have access to the coin part of the machine (to, you know, stop them from robbing it), but with a little wizardry, you can jimmy the meters so the coins don’t actually drop down into the collecting canisters. Then all you need to do is laboriously collect them over a period of ten years.

4. Trick the bank! The hardest part of the scam is obviously how to make sure the bank doesn’t realize something weird’s going on when you turn up with a thousand dollars a week in change. Well, it turns out it’s as easy as just saying “a friend owns a vending machine business.” Seriously, money laundering is that easy. Mr. Bagarozzo apparently was even given a special box to hold exactly $500 worth of the coins to make his transactions smoother. Great work, banks.

5. Wait it out for a decade and then live like a king! Oh no, wait, go to jail. Yeah, the second one. Crime always pays. In this case, to the tune of 30 months in jail. The mechanic didn’t even blow the cash on lambos and makin’ it rain during his crime spree. According the prosecutor, Mr. Bagarozzo spent the money on boring stuff like “personal and family expenses.”

The crime finally came to everyone’s attention after a discrepancy was noticed between the old mechanical machines and the new electronic meters, which are now much more widespread, making future crimes of this audacity nearly impossible. Damn. 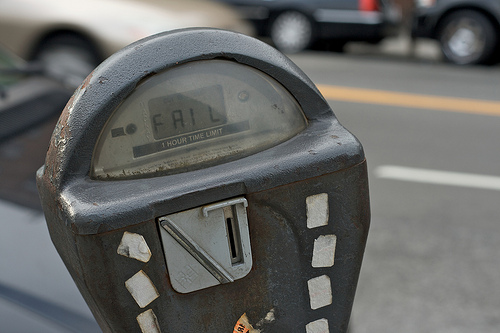