There are a couple of reasons that the sci-fi alien invasion flick has been on the wane while zombie movies have been on the rise. Unlike dealing with brain-dead swarms, part and parcel of full-scale invasion-of-Earth scenarios is a tacit acknowledgment of a comparable, if not higher, form of intelligent life. Until the invading force is defeated—if, indeed, it is defeated—the human audience watching the film is made to feel, well, a little stupid. And then there is the feel-bad factor. Horror movies, as many a die-hard fan will tell you, are meant to titillate. One wants to see Ripley defeating the intergalactic face-huggers of Aliens, not the South African arthropod apartheid of District 9.

The World’s End, out this Friday, shies away from neither of these things and goes a step further in suggesting that bad and stupid are perhaps humanity’s only unique qualities. Having already put their stamp on satirical zombie-ism with 2004’s British import Shaun of the Dead, it was probably only a matter of time before the trio of Simon Pegg, Nick Frost and director Edgar Wright turned their attention skyward. Invoking the communist-next-door fear of Invasion of the Body Snatchers, the film creatively rejiggers the formula for the smartphone set: It’s the nerd-dream technological singularity turned into a logistical nightmare, where free will is diametrically opposed to the next stage of our evolution.

The loss of individuality couldn’t mean less to this sorry bunch. Five former high school chums have grudgingly reunited after their self-styled leader, Gary King (Pegg), persuades them to reattempt a pub crawl they had tried and failed to complete while in their teens. Busy as they are mulling over their various midlife crises, it takes a while to figure out that something is amiss in their former hometown. Their former crushes and bullies are, suspiciously, all too willing to make their acquaintance, and, before long the entire hamlet—men and women with blue light emanating from their eyes and mouths—is hunting them down.

These creatures, initially foreboding, are hybrids of the fever dreams of Steve Jobs and Douglas Adams. As polite automatons (not robots, they argue with annoying sensibility, since that pejorative term essentially means “slave”), they aren’t trying to wipe out the human race, only enhance it. But failure to upgrade is not an option: Willing or not, we’re all about to become shiny, happy (not to mention immortal) people.

The pub-crawling troublemakers fight back. “To err is human!” cries Mr. King after first bungling the phrase. And he may have a point: Despite a too-long third act, dragging action sequences and an epilogue that would have been better left on the cutting room floor, the wordy wit and ingenuity of The World’s End is a sloppy triumph over this summer’s other alien/robot hybrid flick, Pacific Rim. There’s even some emotional heft thrown in as a means of accounting for the darker motivations of the stunted man-child character that Mr. Pegg usually plays with carefree snark.

The World’s End doesn’t really provide an answer to the question of who ought to win in the war of the worlds—though there are elements of “To Serve Man 2.0”—but instead implies that the fate of the world might not be best left to career rebels. In the End, resistance isn’t futile—just facile. 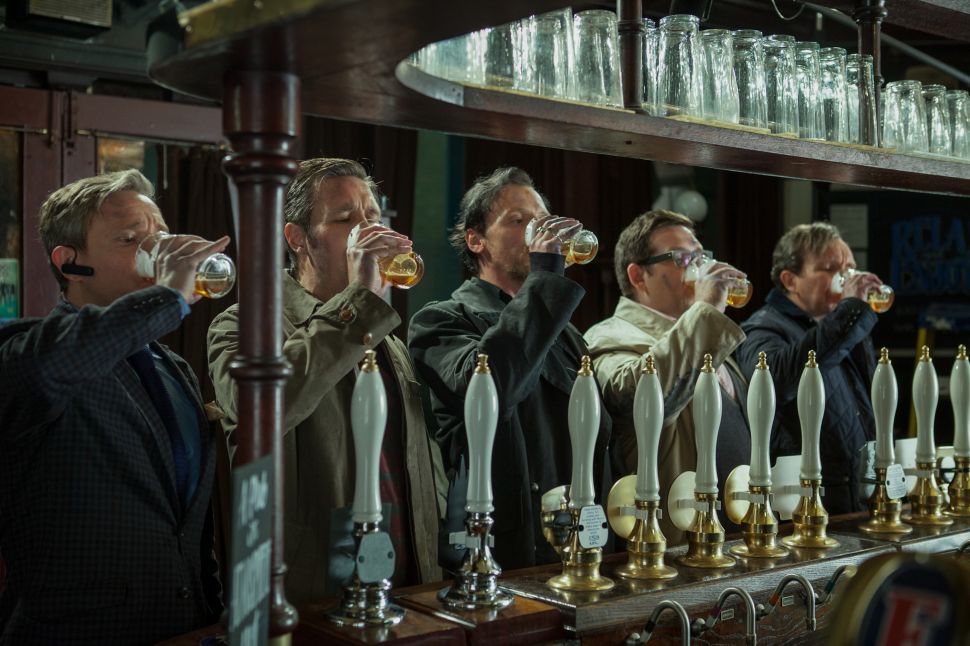