Anybody who’s ever written a mildly critical article, blog post or tweet about Lady Gaga knows that her fans are some of the most fearsome, cutthroat buccaneers on the Internet. If you have the gall to ever critique Ms. Gaga, you should expect a torrent of tweets ripping apart your appearance, your writing style, your resume and probably your mom.

It’s interesting in light of the fact that the pop star is such a firm fixture on the anti-bullying bandwagon. We’ve often wondered if she notices the disconnect herself, and today, through a letter posted on the Tumblr of her Born This Way Foundation, she proved that, yes, she does notice that her fans can be dicks, and she wishes they’d quit it.

From the open letter:

“Sending threats of any kind, using hateful or abusive language, and the provoking of others on the internet is not supported by me or anything that I stand for. What I’ve seen transpiring is wrong and upsetting to me, and I’ve made it very clear how I feel about equality and compassion.

I know how angry you feel sometimes, and I know that when they say things about me you feel that they are saying them about you as well. But music is about love, and is about sharing in the magic of theater. Although pop culture and society have become more negative and critical of the artist over the years, by engaging in this negativity you are allowing it to spread.”

She asks her fans to “take a pledge” with her to be more positive and recognize such behavior is wrong. She also basically says she doesn’t give a toss if her fans get blocked or banned for their bullying ways, asking that “Twitter and other social media platforms support this effort to monitor and control abusive and threatening language, as I don’t know that I am powerful enough to stop it myself.”

Good luck though, Gagz. We sincerely hope your fans can learn to chill the fuck out. Maybe next you can inform them that you are a multimillionaire who gets paid to sing and dance and romp naked through the woods and call it art, so it doesn’t matter how many people hate on your latest music video. 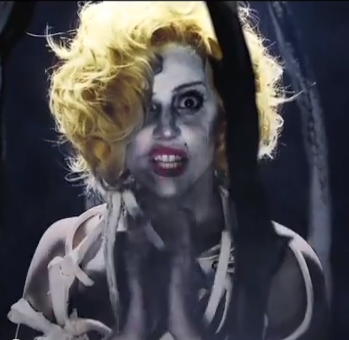