After winning his party’s nomination in Tuesday’s special primary election, U.S. Senate hopeful Steve Lonegan says he expects to receive support in the coming weeks from all Republicans – including GOP Gov. Chris Christie.

The onetime Christie opponent who won a decisive victory last night against Alieta Eck says he has little doubt about whether the governor will come around to lending his support. Christie, who’s stayed out of the fray up to this point, indicated in recent weeks he would endorse a candidate once Republican voters decided.

“Yes, yes I do,” responded Lonegan at his Secaucus victory party when asked if he expects to receive the governor’s endorsement.

“I expected to have all Republicans’ support,” he added.

The governor recently criticized Lonegan’s team during a news conference a day ahead of the primary for posting a racially charged tweet Christie referred to as “inflammatory and inappropriate.”

But when pressed by reporters to weigh in on whether Lonegan’s response to the campaign staffer’s tweet could hinder an endorsement down the line, Christie indicated it wouldn’t prevent him from backing Lonegan.

“We’ll see what happens tomorrow in the primary. I’m not going to make any prejudgments on that beforehand,” Christie said on Monday. “In terms of endorsements and all of the rest of that, I’ve said, and I’ll continue to say, that I fully anticipate endorsing the Republican nominee for the U.S. Senate, so that hasn’t changed.” 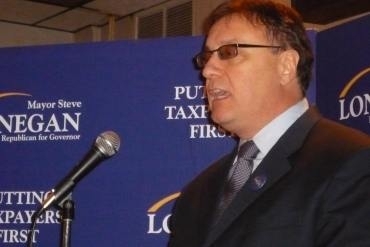