Headline of the Day: “Blasé About De Blasio.”

The New York Post has more details from Manhattan Borough President Scott Stringer‘s chaotic press conference: “A community supporter then chimed in, “Hey, stop feeling up on her! What is your problem? I thought you didn’t even like Jews.’ The married Lopez-Pierre replied, ‘What are you talking about? Two of my girlfriends I’m having sex with now are Jewish!'” In a slur-filled email, Thomas Lopez-Pierre denied the story this morning.

The Post also was not especially gentle in their coverage of former Comptroller Bill Thompson‘s endorsement from Assemblyman Dov Hikind yesterday. The article, entitled “Blackface pol backs Thompson,” begins by asking “What’s a little blackface among friends?” It concludes by suggesting Mr. Hikind’s support hurts more than it helps. (Hamodia was nicer.)

In addition to touting Bill de Blasio‘s positions on stop-and-frisk and hospital closures on Road to City Hall last night, civil rights activist Harry Belafonte praised Mr. de Blasio for his biracial home life. “I was quite taken by his family, an interracial family, which said a lot to me about his own vision and where his own personal life had led him,” the singer said.

Congressman Michael Grimm hailed the guilty plea–on immigration charges–of former associate Ofer Biton as vindication in the face of serious fund-raising allegations against him.  “As far as the investigation, we heard nothing in almost a year, so I think what happened is people are starting to realize that none of this was true, as I said from the beginning,” Mr. Grimm said. “People know me now, they know I’m not that type of person.”

And, in case you were wondering: “Top Republican Candidates for Mayor Also Support Stoop Drinking.” 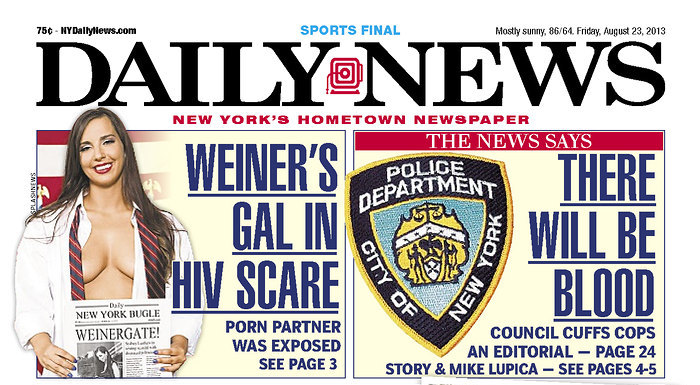