The embattled mayoral candidate faced down his angriest heckler to date in the shadow of the Barclays Center, fending off repeated f-bombs from a woman who claimed to be a former Weiner voter.

“You are disgusting! You are an embarrassment of a third-generation native,” said Jane Borock, 35, as she waded into a meet-and-greet with voters in a plaza bordering Atlantic Avenue. “Your little overnight sleepover in public housing. Fuck you! Go back to your little Hamptons house.”

Mr. Weiner, still playfully quizzing a mother and a young girl, tried to calm the woman down. “You’re very passionate. I appreciate your view.”

“I’m passionate? More passionate than you on Twitter. I’m a social media expert. Get someone to handle your shit! You are disgusting. Disgusting,” she railed. Ms. Borock, wielding a camera phone, then turned to the press surrounding her. “And fuck you all for covering …”

“Does anyone else wanna say hello?” Mr. Weiner offered, urging her to take it easy. Voters ambling by began gawking at the shouting match. “Enough, enough,” he repeated, “You’re putting on a show and we all appreciate it. But enough.”

As Ms. Borock, an art director, vented to reporters, Mr. Weiner continued to meet voters and take pictures. But the antics continued when Mr. Weiner was approached by a man wearing a small white fedora who said he was homeless, and asked: “When you become mayor, will you still be on the Internet showing yourself?”

Ms. Borock, still railing about the affordable housing that she said the new Barclays Center had displaced, re-entered the fray after a brief lull. Mr. Weiner, however, was no longer willing to stomach Ms. Borock’s wrath without a fight.

“Oh, take is easy. Lighten up. You put your show on. Why don’t you beat it? Beat it!” Mr. Weiner shot back, strutting in front of his sign-holding volunteers.

Several men to the side yelled encouragements for Mr. Weiner.

“No one intimidates you. You want to want to know who I am? I’m someone that’s voted for you!” she yelled.

“Kay, well you’re not anymore. I’m gonna get over it,” Mr. Weiner said.

“I’m not. I am not,” she said, trying to impress on him how she’d felt betrayed by his conduct.

“One person yelling isn’t going to stop me! The kind of mayor I’m gonna be is going to be to stand up to people yelling!” said Mr. Weiner, his voice rising.

Then his volunteers, nearing a dozen in number, broke into a chant of “Anthony! Anthony!” Ms. Borock shouted back “Misogyny!”

Not long after, Mr. Weiner seemed to revel in the sparks. “I love how crazy I make some people,” he said, grinning.

Ms. Borock later posted a photo of an angry-looking Mr. Weiner on Twitter, with the message, “Just had a little chat with #weiner. Watch the news tonight.” 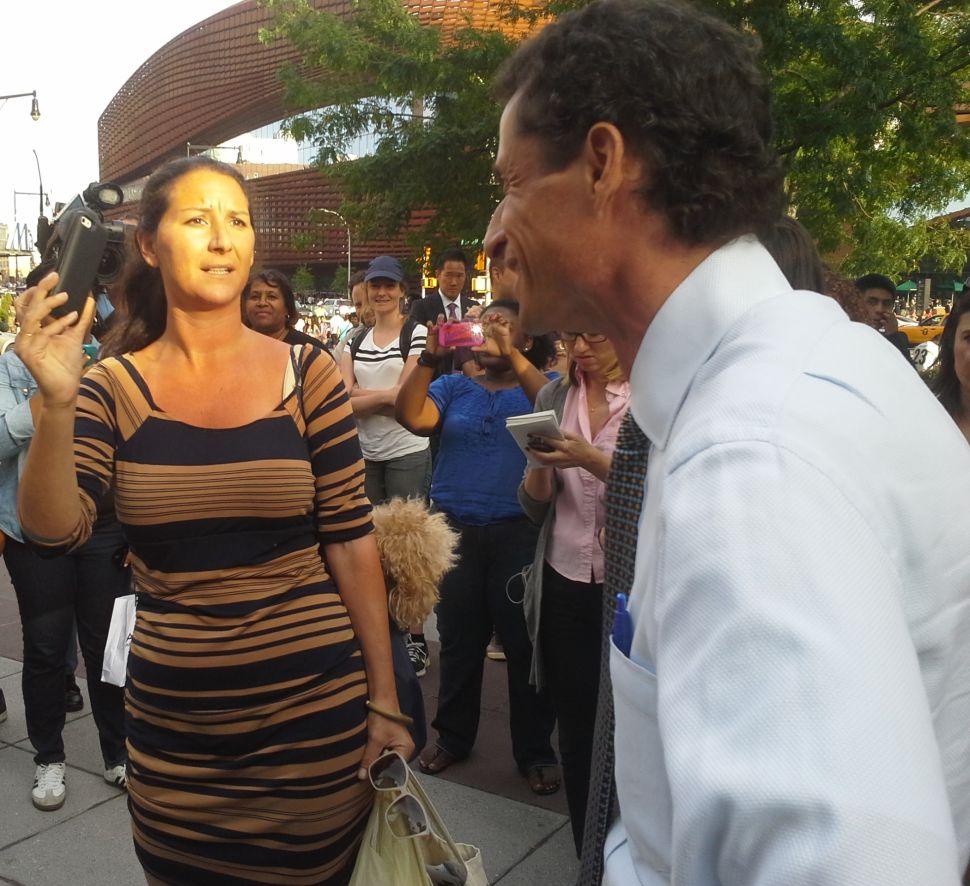