Ms. London came to sound art through video art, that other great experiment of the time. She studied Islamic art at New York University, but started at MoMA working as an assistant on various shows, including one of contemporary art that featured video works. Soon she was organizing shows of video, and  helping the museum to acquire some of its first pieces, by artists like Bruce Nauman, Peter Campus and Paik. She also established the “Video Viewpoints” series for video artists to screen and discuss their work. “I told the artists, ‘What you say is very important, and we’ll audiotape it, because you being in front of our audience means people get to understand better what you’re doing.’” Throughout the 1970s, she gave early museum attention to artsts involved in video and sound, like Laurie Anderson, Terry Fox, Lynda Benglis and others. Ms. Katzeff recently came across letters from Ms. London from that time in the archives of the Institute of Contemporary Art in Philadelphia. “It was unbelievable to see what artists she was working with at that time and how there were so few museums who were interested in presenting video as art.” Museums have long been interested in presenting sound as art, and recently there have been some significant technological advances to make it easier to exhibit. In 2005, London’s Tate Modern featured an ambitious Nauman sound installation at its vast open Turbine Hall. By using highly directed speakers, the museum didn’t have to install any room dividers to keep the various elements of the piece. You could listen to one part, then move a few feet along and be listening to an entirely different one.

Such technical advances aside, the properties of sound helped inspire a bit of the layout of “Soundings.” “We had the idea that sound is fugitive, so could we have it bleed a little bit?” Ms. London said mischievously. Though most works have been carefully ensconced inside galleries, limiting sound spillage (there’s not a headphone in sight), others are spread throughout the museum. Near the third-floor escalators, Sergei Tcherepnin has wired up a battered New York subway bench with transducers to turn it into a creepily physical speaker (it debuted earlier this year at the Chelsea gallery Murray Guy, which was helpful, Ms. London joked, “to make sure there are no electrical hitches and that our public isn’t electrocuted”). Along a hallway, composer Tristan Perich has aligned 1,500 microspeakers in a grid, forming a wall of burbling static. Carsten Nicolai’s sculpture emits sounds so quiet they can be perceived only as rippling rings on a video projection of . A week and a half before the exhibition was set to open, some of the artists gathered for a press preview, and it turns out that, unlike Mr. Vitiello, some artists do like a staircase. German artist Florian Hecker, who makes thrillingly extreme, sometimes abrasive synthetic music (“He likes to conquer,” Ms. London quipped), has hooked up three speakers at various points along MoMA’s iconic Bauhaus staircase for a 60-minute collage of synthetic sounds that twists and splinters and caterwauls in all sorts of surprising ways. He composed the piece using a system he calls “chimerization,” in which textures and fragments of compositions are mapped on top of one another, and used a computer program called Sift Flow to create the abstracted images that he shows along with the piece, which are made to picture the production of the sound. He likes “rogue spaces” for his work, he said, locations like staircases “that don’t yet belong to something, that are a little bit of an in-between.”

Mr. Vitiello’s piece, A Bell for Every Minute (2010), can be found in the museum’s sculpture garden, below the office where we met. To make it, he went around New York and recorded 59 different bells, and he has one ring every 60 seconds, all of them pealing out at the top of every hour. It debuted three years ago on the High Line, but it’s different a MoMA, and not just in the details of its technology (medium-sized JBL Control 29 speakers, instead of the larger Control 30s he used on the High Line). There happens to be a church near the museum whose bell rings out regularly. “So,” he said, “you get that as sort of an accidental collaborator.” 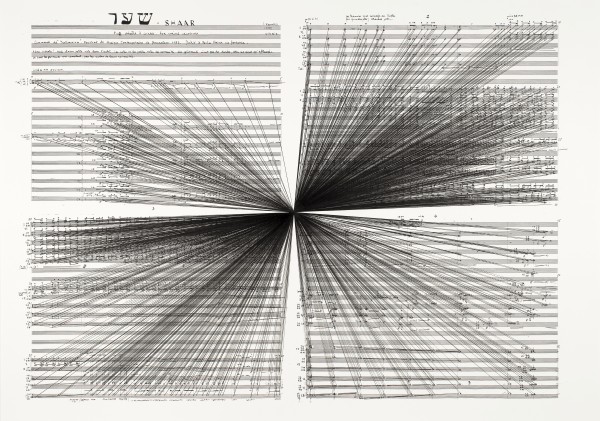