Get to the Whitney before Sept. 1, and take the elevator to the fourth floor. Set aside a good chunk of time. There’s no line, thankfully, but you will want to spend some time there. What awaits you is one of the finest historical exhibitions of the year.

In that airy gallery, the museum is displaying an installation that the now 84-year-old Californian Robert Irwin, indisputably one of America’s greatest living artists, created especially for the space 36 years ago, when Marcel Breuer’s building was only a decade old. It has not been seen since its premiere run, in April and May of 1977, as part of an Irwin solo show organized by then-Whitney curator Richard Marshall.  (The museum’s chief curator, Donna De Salvo, is responsible for its current presentation.)

The work has few components. A white polyester scrim runs the length of the space, from the trapezoidal window overlooking Madison Avenue to the far wall. It reaches from the ceiling to exactly five and a half feet from the floor. A three-inch-tall stretch of black aluminum runs along its base, and a three-inch-thick black line has been painted along the perimeter of the room’s walls, also five-and-a-half feet above the floor. And that’s it.

The only light in the room comes from Breuer’s famous window, so that it hits one side of the scrim and gently cascades down the length of the room, creating a grayscale gradient, from bright white near the window to almost pitch black at the opposite end of the room. The light changes tone depending on which side of the scrim you stand on, and from some vantage points that long wash of light even gives off hints of color: dashes of light purples, maybe some greens.

It feels like you are seeing with fresh eyes, with a new clarity that is at first intensely disorienting. Stepping off the elevator I felt a momentary shot of fear, unable to decipher the odd cascade of light I was seeing on the scrim. Even once I adjusted, the aluminum bar and wall-painted line continued to keep me off balance as I walked through the space, never quite overlapping in my field of vision. They bobbed up and down as I walked, charting almost imperceptibly my position in the gallery.

This piece of Mr. Irwin’s occupies a heroic place in Lawrence Weschler’s 1982 biography of the artist, Seeing Is Forgetting the Name of the Thing One Sees. In the book, Mr. Irwin describes Scrim Veil—Black Rectangle—Natural Light as the apotheosis of his decade-plus-long effort to dematerialize the art object—a project shared by many of his contemporaries—and to reduce it to what Mr. Weschler calls “Point Zero.” (The Whitney has smartly published the installation’s original 1977 catalogue online and released recent recordings of talks by Messrs. Weschler and Irwin, to help tell more of the work’s backstory.) As Mr. Irwin put it at the time, “That show provided me with an opportunity to mark an X at the point where I jumped off.” Even today, it lives up to its legend.

At a time when so many museum-filling installations are overblown, its absolute spareness, its matter-of-factness, shocks. With just a bit of scrim and two long black lines, it outclasses the city’s other light show: James Turrell’s underwhelming and embarrassingly eager-to-please planetarium spectacular at the Guggenheim.

Unlike Mr. Turrell, and many of today’s most successful artists who share a disturbing desire to over-engineer experience, Mr. Irwin displays in his very subtle work a trust in his viewers, a willingness to let them figure it out, or not. His art may fundamentally be about seeing, but it carries with it a generosity as vital as the visual magic it tenders. (Through Sept. 1, 2013) 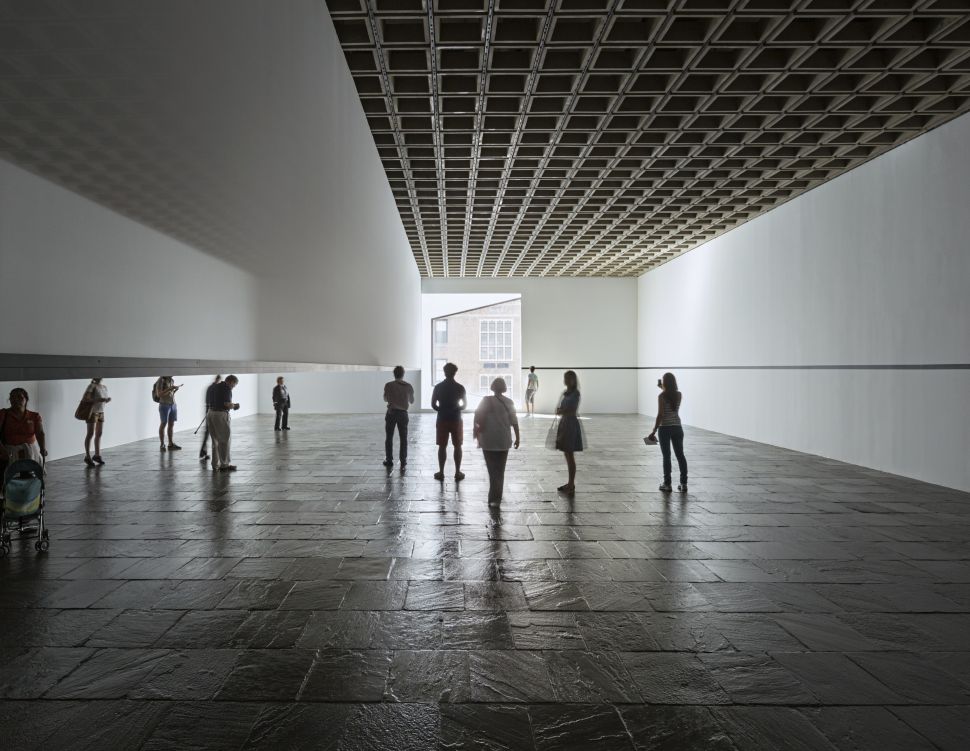