It’s basically unconscious how we use our phones: open Facebook, scroll down, close, open Twitter, scroll up, close, open Snapchat, tap down, close. Then rinse and repeat until our eyes are hitting peak struggle and we slip into a slumber.

And now, according to new research, it’s an epidemic: More people are “snacking” on apps at smaller intervals of times, but we are opening them much more frequently throughout the day. It’s also shortening our attention span.

A Web analytics firm uncovered this by tracking 500 news apps across 100 million smartphones for a year. It discovered that we’re spending 26 percent less time on the apps during each session, but we opened apps 40 percent more often. An app is opened 25 times a month, an increase from 18 times last year.

(Of course, we check Twitter more than that in an hour, but this survey was for normals).

Raj Aggarwal, who led the study, said it’s clever ploy by app makers as they further  integrate into our lives. For example, weather apps are using scaremonger-like techniques (i.e. “A catastrophic storm is coming!“) that forces us to check it more frequently.

Interestingly, the average time spent on a social networking apps are limited, but we check them more frequently to see what our friends are up to or to prevent FOMO. Also, you can blame Dots for not wanting to put down your phone. That was the only sect where the our average time increased — around nine minutes per session in 2013. That’s more than double since than the previous year.

Mr. Aggarwal commented to Reuters that our phones are important to us as breathing. “They’re more engaged with the device, and not just using it as a way to kill time.”

Did somebody say we could marry our phone? Let me check Sunrise. 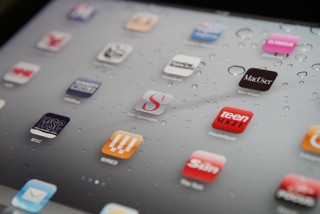