Don’t you hate when you get something cool, then suddenly all the other kids want it?

The borough of Queens has decided to up its game and is conducting a study into the possible redevelopment of an abandoned rail line into a park, similar to Manhattan’s popular High Line, according to DNAinfo.com.

The Trust for Public Land, a national nonprofit which aides to develop city parks, has asked for design proposals for the unused rails, eventually settling on two New York based firms,  WXY architecture + urban design and dlandstudio.

A press release heralded the plans for the park, aptly named the Queensway:

“When it is finished, [the park] will create a 3.5 mile linear park along an old Long Island Railroad track path, stretching through central and southern Queens. It will connect multiple communities and provide green space for 250,000 people in the borough. The park will also celebrate the borough’s diversity, with art, sculpture and food from around the world.”

Initially, the companies will only conduct a study to assess the practicality of the project, which will alone cost $400,000. If it proves successful, the firms will then need to secure funding for the project.

Luckily, the scheme already has several financial backers.  The funds amount to around $1 million, raised from private philanthropists, the state and the city, according to Andrea Crawford, vice chair Queens Community Board 9 and member of Friends of the QueensWay.

The Friend’s group is similar to the Friends of the Highline, who successfully lobbied to preserve the historic Manhattan High Line and redesign it for public use, a move which created one of the world’s most popular parks, taking millions of visitors a year.

Of course it’ll be nice for the people of Queens to have a new park, so I guess Manhattan will just have to go all hipster and say, “Yeah, we were into parks on abandoned rail tracks before it was cool.” 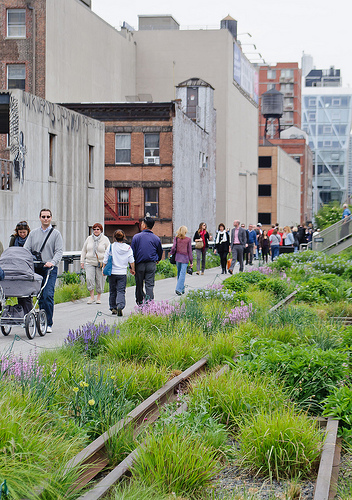