With Primary Elections in New York City and New Jersey weeks away it’s the season for political jerk-offs, and so far we’ve witnessed our share. I’m not talking about the candidates. I’m talking about the operatives.

That’s me, for over a decade now. I’ve done just about every campaign job there is, from yard sign putter-upper to campaign manager for several Congressmen. Campaign staffers have always been arrogant. They wouldn’t work 90 hours a week for no/low pay if they didn’t believe that their ideas were somehow reflected in the candidate’s plans. And since the dawn of campaigns there have been lowly interns and junior staffers who played Carville and Rove and wondered why their strategies weren’t being implemented. And for just as long there have been higher ups on campaigns telling these kids to shut the hell up, eat their free pizza, and do what they’re told.

What’s new is the way in which these little shits suddenly feel free to express their displeasure to anyone who will listen, including the media.

Coming out of the season’s two most high profile campaigns this week were stories highlighting two world-class political jerk-offs. The first was a low level Booker for Senate staffer offering his detailed critique to his superiors. The second came via a former intern on Weiner for Mayor penning a cover story for the Daily News enumerating the campaign’s shortcomings.

Olivia Nuzzi, former intern on the Weiner Campaign offered captivating insight into the motivations of people she barely knew (she worked for Weiner a month) and filled us in on Anthony Weiner’s inability to remember names (including the delicious detail that he often guessed “Monica”). My favorite part of her little story was how she called the Communication Director’s resume “short.” What was said comm director’s last gig? She was the Press Secretary for the New Jersey State Education Commissioner. Last time I checked, that title was a tad more impressive than “intern.” Talk about a garbage thing to do to get a glamour shot in a newspaper. I don’t recommend the “slutbag” tirade that Anthony Weiner’s Comms Director, Barbara Morgan, fired off in retaliation, but every point she made was spot on.

The guy from the Booker Campaign was even better. He sent an email to his regional field director detailing all that was wrong with the field plan and his lack of access to it. His two big complaints? First, he got jerked around on free housing. Second, he didn’t believe making volunteer recruitment calls was the best use of his time. What do those things tell me about this kid? Everything. Not only is he a crybaby, but he doesn’t know a damn thing about field work.

Maybe I’m a throwback kind of guy, but when it was time to recruit volunteers, make phone calls and knock on doors I did what I was told, when I was told. That’s how we got after it back in ’06. We slummed it. My bed was inflatable. I spent more time in my car than any other place. Dinner meant Sheetz or Wawa at midnight and it was delicious.

Field work is hard. It’s not glamorous. In 2008, when I got called into a congressional race to be Political Director, they told me there would be housing. I was pretty pumped. I got there and slept in a Red Roof Inn in the shittiest part of Wilkes-Barre, Pennsylvania for two weeks. Then I proceeded to move no fewer than seven times, culminating at the Addams Family’s house in the back mountains of Pennsylvania. I did it with a smile. Why? Partly because to make it in this business you have to be crazy but also because I was happy to be there helping a good guy get elected. It’s the price you pay for wanting to make a difference. You know what I didn’t do? What I would never do? Get on the crank with a reporter and cry like a baby. Seriously, interns and field reps, toughen up. More importantly, smarten up.

I get it. You love The West Wing and House of Cards. You even like the BBC House of Cards. You were the president of your school’s college Democrats or Republicans. You tweet like crazy and read Politico. You deserve to be taken seriously. Oh wait, you don’t. You don’t know shit. I love and admire volunteers but I ain’t trying to give them the keys to the castle. You don’t blow in the door and act like you know everything. You’re not the manager, you certainly aren’t the consultant and there are 1000 reasons why that’s the case. Not the least of which is your cover story in the Daily News or your leaked email to reporters that outlines precisely how little you know about campaigns. I wouldn’t hire these two to do anything ever, and I bet these attention-seeking misjudgments will follow them around for a good while.

You want to make it in the business of politics? Take a couple lessons from these stories. First, keep your mouth shut, you don’t know anything. Second, loyalty is the whole game. It really is that simple. If you don’t get that, then go get some 9-5 gig because politics isn’t for you. 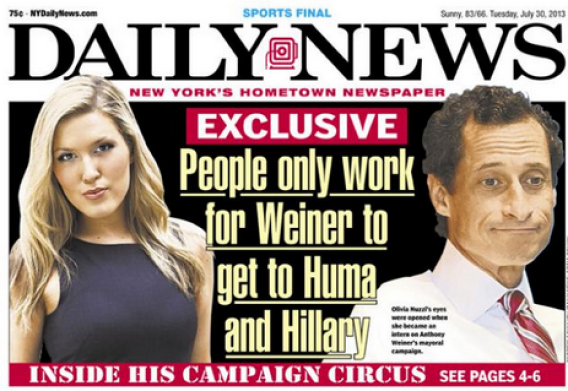