Aside from the fact that he was a drug dealer, nothing seemed unusual about the guy sitting on my couch one recent sweltering Thursday night as I applied one last swipe of mascara. Of average build, he wore jeans, a “Not Your City” T-shirt and high-tops to match a red, black and gold Chicago Bulls cap, which had a stiff straight rim.

“Thanks for letting me tag along,” I said, feeling as ready as I ever would to accompany a dealer on the job.

“I could use the company,” he said, shrugging.

They call him the Reliable Locksmith because back when people handed out business cards, his were printed with that decoy of a title and a single phone number. As a one-man black market delivery service, the Reliable Locksmith prides himself on timeliness, stocking quality product and precaution. Accustomed to monitoring his surroundings at all times, he moves slowly and steadily, though with self-assurance. He answers only texts or calls from numbers logged in his contacts folder, all of which belong to people vouched for by someone he trusts.

A couple months ago, the Reliable Locksmith and I bonded while hating a Justin Bieber song blaring nonironically at an intimate house party thrown by the heir to a Manhattan real estate fortune. By the time I learned that my new friend had supplied all the “party favors”—several grams of cocaine and, of more interest to me (professionally, of course!), Percocets—I was drunk enough to ask if he would let me observe him at “work” one night.

My mission, I explained, would be to assess the current Percocet market in light of the escalating nationwide crackdown on prescription painkillers. I wanted to find out who was using, why the drug was so popular and how supply and demand were being affected by the country’s war on pharmaceuticals. A few weeks later, I climbed into the back seat of a chauffeured black sedan to sit alongside the Reliable Locksmith, who employs a driver to avoid the hassle of parking and to blend in when orders take him to town car-riddled areas. In the name of “not weirding out the buyers,” we agreed that I’d remain in the vehicle while he transacts.

Driving north from the Financial District, I asked the Reliable Locksmith how he’d characterize his customer base.

“They’re hard-working, well-to-do types who wanna unwind—but without the stigma, you know?” he said.

Percocet, a combination of acetaminophen and oxycodone (a variant called Percodan uses aspirin instead of acetaminophen), is a highly addictive opioid classified as a Schedule II controlled substance. While its euphoric effect is virtually indistinguishable from heroin’s, many view it as the socially acceptable, “G-rated version” of its non-pharmaceutical cousin.

“I popped a twinkie an hour ago myself,” said the Reliable Locksmith. (Percocet’s street name is inspired by its yellow color and oblong shape.)

When he held out a plastic baggie containing several hundred 10-milligram pills, I grabbed one (because it seemed rude not to) and I was curious. I had to hold off on experimenting, though, lest I compromise my capacity to take mental notes.

The Reliable Locksmith was constantly coordinating logistics, texting at a rate unmatched by even an incensed Alec Baldwin in the midst of a Twitter feud. Thumbs fluttering, he dictated the downtown street address of “a Wall Street type” who was willing to pay a premium for fast service. The plan was to tackle a slew of orders along Manhattan’s East Side.

“It’s impossible to meet demand these days,” he said with a sigh. “So we’ll see how quickly I run out.”

According to the Office of National Drug Control Policy, the number of prescriptions filled for opioid pain relievers increased by 402 percent on a milligram-per-person basis from 1997 to 2007. After marijuana, prescription pills are the second most abused drugs today. It follows that they’re also responsible for an alarming number of overdose-related deaths. In a briefing on the issue, the Centers for Disease Control and Prevention said that 14,800 overdose deaths in 2008 could be attributed to opioid pain relievers—more than the number caused by cocaine and heroin combined.

Especially last year, officials at all levels have been ramping up their efforts to stymie the abuse and supply of these drugs. In a precedent-setting move last fall, the NYPD arrested 21 small-time dealers operating through Craigslist. In January Mayor Michael Bloomberg implemented a policy limiting the prescription of painkillers from emergency rooms at the city’s 11 public hospitals. In June, Walgreen Company, which owns the city’s ubiquitous Duane Reade chain, agreed to pay the Drug Enforcement Administration $80 million for failing to detect suspicious activity at pharmacies filling high volumes of prescriptions. Meanwhile, many states have augmented their prescription monitoring programs. For its part, New York recently launched Internet System for Tracking Over-Prescribing, or I-STOP, a real-time, online database that lists patients’ controlled substance histories.

About nine months ago, though, he told me, obtaining the drugs became markedly more difficult. So he started charging $10 a twinkie, a price that has already jumped by 20 percent to 30 percent in the last few months.

“What do you think people’s twinkie price max is?” I asked as we pulled up in front of a Lower East Side walk-up.

“My customers don’t really flinch at the cost,” he said. “They just want the things.”

When the Reliable Locksmith returned, he was sweaty from climbing five flights of stairs, but happy to have moved 50 twinkies at a whopping $18 each. Total profit: $350.

“Union Square,” he told the driver, who had yet to speak. “This guy’s a big buyer, but I’ll charge him less since I know him. You might too, actually. Dude’s legit D-list. Actor.”

I watched the Reliable Locksmith, in a masterful casual handoff at the corner of 15th Street and Irving Place, sell 100 twinkies at $12 a piece to a reality TV recognizable face.

Instead of heading back, though, the Reliable Locskmith approached a white-haired woman inching her way down the sidewalk with the help of a walker. Did he see a cop and decide to redirect his path? Are grandsons generally exempt from stop-and-frisk? Or is escorting an elderly woman across the street the best way to offset I-deal-drugs-for-a-living guilt? Only as he leaned in for a hug, did I realize what I was witnessing: a supplier-to-distributor swap masquerading as a multigenerational embrace.

On the way toward Murray Hill, where a 20-something female “who’s always fiending” resides, the Reliable Locksmith organized his additional inventory.

He sold the woman all 75 of the pills he had just acquired from Jessica Fletcher for $15 a piece.

“Everyone seems to buy in bulk,” I said.

“Well everyone’s afraid of running out,” he said, pausing to reflect. “And they’re popular, I think, because they’re safer in a way. You don’t have to worry if the stuff is cut with caffeine, baking soda or laxatives or whatever.”

“So it’s the health-conscious drug choice!” I said.

“Right on,” he said with a nod. “But seriously, it is safer to swallow something that comes from a lab and not Afghanistan.”

He had a point. Prescription opioids are probably easier for users to justify popping, snorting or injecting because getting high off something that qualifies as medicine seems cleaner in addition to less shameful. The drugs are also generally easy to find—albeit, in unpredictable quantities—by anyone who cases the medicine cabinets of a friend or family member after the removal of a wisdom tooth or a chronic pain-inducing sports injury. The city’s favorite addict, Cat Marnell, has bragged about the ease with which she scheduled multiple appointments with plastic surgeons for boob jobs she never planned to get so she could finagle prescriptions in anticipation of hypothetical future pain—a practice known as “doctor shopping.”

What could be so harmful about something so prevalent?

The very factors that have made the drug so easy to procure and to swallow with a false sense of security, however, have also made it relatively easy to control. It’s simpler to attack an industry that depends upon a product manufactured and distributed by corporate executives beholden to the law than machine-gun wielding Scarface types. By the Reliable Locksmith’s account, demand for twinkies remains inelastic, but the measures taken to slash supply have proved so effective that the illegal trade of these legal narcotics may be brought to a complete standstill in the not so distant future.

It was 12:45 a.m. when we made it back downtown from the Upper East Side, where the Reliable Locksmith depleted the remaining contents of his baggies in just two deals—one to a high-powered media executive, the other to a college kid staying at his parents’ penthouse for the summer.

In parting, I asked the Reliable Locksmith how he’s coping with the abrupt decline in business.

“The upside is that I’m done earlier in the night, so I can go out more,” he said.

Would he seem so unfazed if he hadn’t taken that pill earlier? While I’m in the process of changing, my small yellow souvenir fell to the floor. I considered taking half before bed, but decided to tuck it in a safe place instead. How much momentum does the anti-prescription drug campaign have to gain before my token’s so rare, it’s worth a Benjamin? 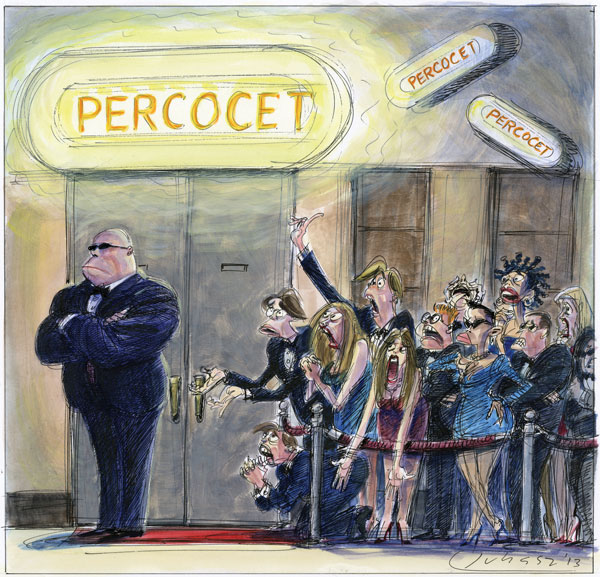