Despite plummeting poll numbers, a feisty Anthony Weiner door-knocked inside a Harlem public housing building last night with a horde of press, convinced more than ever that he’d be the city’s next mayor.

Along with several aides and a voter registration list, the former congressman visited apartments throughout a 17-story building on St. Nicholas Avenue, meeting a motley mix of enthusiastic, indifferent and resentful potential voters.

An hour of tramping cramped hallways and dank stairwells also allowed Mr. Weiner to both mock and cajole the media gathered around him–a departure from the outright disdain he’d shown to the press in recent weeks in the wake of his latest sexting scandal.

“It’s kind of like how I view the press corps–one big cuddly collection of humanity,” Mr. Weiner responded sarcastically when Politicker asked which of his Democratic rivals irked him the most. “I think of you all fondly.”

In addition to the usual local papers, Mr. Weiner was also trailed by a reporter from a German media outlet and later a British television station. And it seems the international intrigue had him amused.

“This is how they do it in Germany?” Mr. Weiner asked the reporter as he hammered on doors and slipped low-budget fliers underneath those that wouldn’t answer. The reporter said politicians there did not, in fact, knock on doors.

Later, in another hallway, Mr. Weiner grilled reporters about who they wanted to be mayor. After a few uncomfortable smiles, Mr. Weiner took another jab at Democratic rival Bill Thompson, an even-keeled and less flashy candidate.

“Who’s better than me?” he asked. “Mayor Thompson for four years?”

Politicker then asked if Mr. Weiner could top the 24 straight hours of campaigning that Mr. Thompson did a week ago.

Later, in an interview on the St. Nicholas Avenue sidewalk with British television station ITV, Mr. Weiner struggled to take any of the questions about his candidacy seriously, breaking briefly into a British accent.

“Would anything stop you?” the British journalist asked.

“I just have a feeling, like, I’ve stepped into a Monty Python bit. I don’t know, would anything stop me? What, now a rock’s gonna fall on my head? No, nothing can stop me, I’m gonna win this election,” he said.

At the end of the interview, the wise-cracking Democrat offered to do the British weather report.

Overall, the Weiner camp’s first public canvassing event had a somewhat shambling, disorganized feel: Mr. Weiner accidentally knocked on the same door twice on two seperate occasions. And at one point, an elevator crammed with press accidentally shot toward the lobby instead of heading up to the 17th floor. But the spry Mr. Weiner, who jokingly suggested that an NBC cameraman “get a hobby,” also met several voters who welcomed him warmly.

One voter–a Latino man who spoke limited English–even had a Weiner campaign sticker on his door.

“That’s great, I never saw someone who’s run for mayor knock on my door,” said Dan Washington Jr., 48, another building resident. “He’s human, you know, regardless of whatever he did in the past.”

Perhaps the most bizarre moment of the night came when Mr. Weiner knocked on the door belonging to Frances Collins. As Mr. Collins was welcoming Mr. Weiner into his apartment, another woman shouted from the kitchen, asking Mr. Weiner to stand near an Israeli flag in their living room.

“Are you Israeli?” Mr. Weiner asked.

“No, but we do believe in Jesus Christ … that the Jews will come back to Jesus Christ,” Mr. Collins replied.

“But don’t you also believe we have to be wiped out before the messiah can return?” Mr. Weiner wondered.

Mr. Collins assured him that wasn’t the case.

“Okay. We’re cool. What a relief,” said Mr. Weiner, who then proceeded to pose for a several pictures in front of the flag. 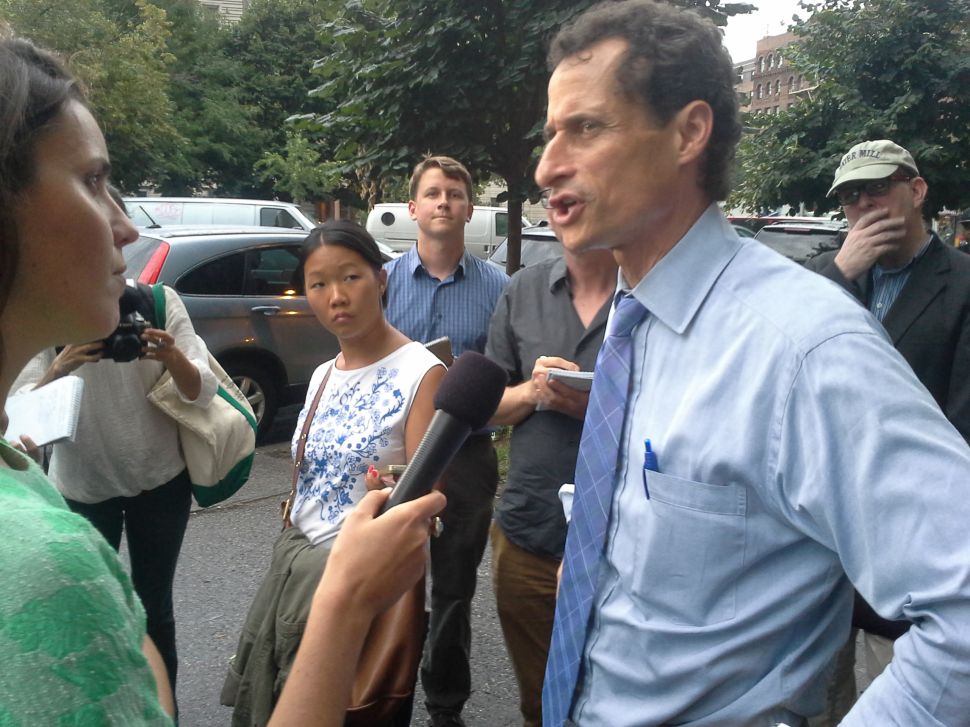