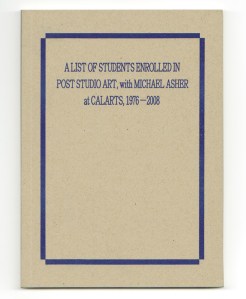 At the New York Art Book Fair this past weekend at MoMA PS1, I came across a little book called A List of Students Enrolled in Post Studio Art, with Michael Asher at CalArts, 1976-2008 at Golden Spike Press’s stand. The title pretty much sums it up: each page page features the roster for one semester that Asher taught that famous class, which was notorious for stretching from 10 a.m. in the morning until well into the evening. (You may recall that Sarah Thornton wrote about the experience of attending in her 2008 book Seven Days in the Art World.)

A List of Students… was released earlier this year in an edition of 1,000, with proceeds going to the Michael Asher Memorial Scholarship at California Institute of the Arts, which was started after the master of institutional critique passed away last year at 69. It was compiled and edited by Leslie Dick and Adriano Pedrosa, and designed by Michael Ray-Von. Besides being a handsome and appropriately concise tribute to one of postwar art’s greatest practitioners, it seems likely to invite discussions on pedagogy, intellectual influence, professional responsibility and all sorts of other interesting, contentious topics. It’s a perfect pamphlet to place on your coffee table, in other words.

Have a look at a few excerpts over on Golden Spike’s website, including the Spring 1981 class list, which includes Christopher Williams.