And the Qatari-owned network pulled out all the stops to emphasize the “America” in the title. “We are here tonight to do more than just celebrate our launch. Honestly, that was just the start of Al Jazeera America story,” Interim CEO Ehab Al Shihabi said in his remarks to the room. “The next step, which began even before the channel actually went on air, is to demonstrate to our viewers that Al Jazeera America provides unbiased and objective reporting from the domestic and international news that is important to Americans.”

Selling Al Jazeera America to Americans is no easy task. When Al Jazeera announced that the media company had acquired Current TV and planned to launch an American network, the news was met with skepticism (and a deluge of resumes). Since the network’s late August launch, there has been a slew of articles questioning whether the network will be able to overcome its branding problem.

But if last night was any indication, the network is hyper aware of the challenge.

The menu was all-American: one station served comfort food, including miniature hotdogs, bacon cheeseburgers and lobster rolls, while another station dished up succotash and shrimp gumbo. The bar was open and drinks poured freely. Jennifer Hudson, clad in a short, tight, long-sleeved black turtleneck dress, performed several songs to the constant snapping of cellphone pictures. During her rendition of “I Wanna Dance With Somebody,” the American Idol alum came down from the stage to dance with the audience.

For dessert, caterers wheeled doughnut carts through the crowd. The pastries, in sophisticated flavors, hung from hooks along the sides of the cart and ice cream was served from the middle.

The party favor was an individual apple pie.

Remarks by Mr. Al Shihabi, acting director general Mostefa Souag and president Kate O’Brian were followed by a short video about the network. The word “America” managed to find its way into most sentences.

“Al Jazeera America is really trying to tell the story of Americans, stories that effect Americans,” Ms. O’Brian said in the video.

“We are telling the types of stories that Americans are craving,” said one.

“For an American audience, it’s an amazing time to be able to provide context, because nobody else is doing it,” said another.

“One reason I think Al Jazeera America is really positioned well: we have 12 bureaus in the U.S., we have the backing of a large organization that is going to say if the story needs to be told, we will give you the resources to go tell that story,” said still another.

And the network certainly has the resources to throw a party.

Correction: The original version of this post mistakenly referred to the song Jennifer Hudson was singing while she came off stage to dance with the audience. It was Whitney Huston’s “I Wanna Dance With Somebody,” not The B-52’s “Love Shack.” We regret mixing up the Karaoke standards. 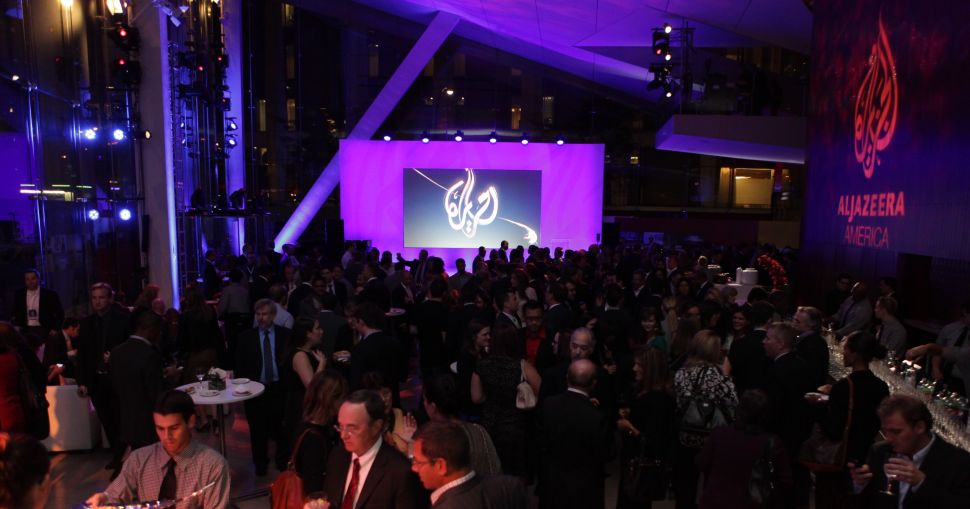