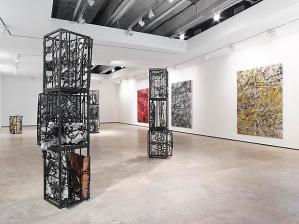 Just 32, New York-based artist Angel Otero has had nine solo shows in the last three years and been featured in numerous shows around the world. Given the blandness of the art he makes, his continued success is deeply troubling and baffling, perhaps only attributable to an art market running on autopilot.

For his sophomore solo show at Lehmann Maupin, Mr. Otero has paired three of his trademark, still-born abstract paintings with a new series of sculptures. The paintings, respectively red, black and yellow, evince his usual gimmicks. He makes them by pouring oil paint on glass and then crumbling the resulting skin onto canvas. He adds more paint over time, building up a rather lifeless mess of material that faintly recalls early-to-midcareer Julian Schnabel (which feels like a charitable comparison) and, in their fractured all-over abstraction, mid-to-late-career Simon Hantaï (ditto). A cynic might say they seem to be engineered for the newbie collector who finds Ryan Sullivan’s paintings (already fairly empty exercises) a little too exciting, Tauba Auerbach’s a touch too brainy and disorienting and Gerhard Richter’s far beyond her budget. (A news release, shockingly, mentions Pollock and de Kooning.)

The sculptures, scattered about the gallery, are burly, ornamented steel gate structures around which Mr. Otero has cast glazed porcelain. They look a bit like something you might expect to find around Anselm Kiefer’s studio awaiting some grander purpose. (Mr. Otero’s ability to parrot established art is clearly a reason for his quick ascent.) They look entirely harmless, like something you’d discover at Pottery Barn. Like his paintings and so much art being shown in Chelsea and at art fairs these days, they’re just proficient-looking enough—and just easy enough—to attract buyers, to look comfortable up on the wall right now. However, there is little reason to think anyone will remember them for long. (Through Nov. 2)