On most days, Siggi Hilmarsson, 37, eats more than a pound of yogurt. Which sounds excessive, but for the Icelandic entrepreneur—whose eponymous brand, Siggi’s, is a national success—it’s merely business as usual. Mr. Hilmarsson makes a special kind of tangy strained yogurt called skyr, a product of his homeland, and he cooked up his first batch in 2004 as he was tinkering with an old recipe in his Tribeca kitchen. While he no longer makes yogurt in his apartment, on a recent morning, Mr. Hilmarsson gave us a tour of the spacious loft in which it all started. The mood, however, was bittersweet: He’s moving out in December, leaving behind a slew of memories—and perhaps a few live cultures in the floorboards.

Do you eat yogurt for breakfast?

Probably four days out of seven. I have three breakfasts, basically—that’s it. I have a yogurt and then I have oatmeal and then I have eggs. I try not to have yogurt on the day that I’m sampling a lot of it—just to make sure I’m fresh.

Where do you spend the most time? Is it still in the kitchen?

I like sitting at my desk, if I take a day to work from home. Often I do that when I need to write something or do something that’s a little more cerebral. I like to be at home because it’s less distracting. Often, on weekends, I have breakfast sitting in the living room. I sit on the floor, eat and type on the little desk in the corner.

Has the apartment changed in your time here?

We’ve rearranged furniture, but mostly it’s stayed the same. One of the things I really like about it is its eclecticism, in that it’s been this kind of hand-me-down apartment since the 1980s. Various people at various stages of their careers and lives have lived here. And they’ve all left stuff. It’s like an unbroken chain. There’s never anybody who totally moves out.

What are your three most cherished items?

I really like this map of Iceland, where I’m from. I look at it when we’re planning hiking trips. I try to go hiking in Iceland every summer.

And there’s a lamp I own that is apparently very fancy. A friend of mine, her boss was redecorating a really fancy office, and she just gave it to me because I was the only one of her friends that had space for such a big lamp.

Then, this item is not used anymore because it’s kind of burnt out—no pun intended—but it’s a kettle. There was a British subletter here for a while. She would always be making tea, so the kettle was always on, there was always hot . And after she moved away, the kettle stayed behind. I don’t make tea very often, but I always have this around. It’s a cow, and I am in the dairy business. And it moos, basically, when it boils. The mechanism doesn’t quite work. It makes a kind of steaming sound that comes out, like a muffled moooo.

I live in a really, really old loft. On one hand, I kind of like the fact that I’m closer to nature because it’s so un-insulated; it gets really cold in the winter and hot in the summer. And even though I like that aspect of being connected to the elements, I would want it to be a little more insulated so that if I wanted to cool it or heat it, it would be more energy-efficient.

What will you miss most about the place when you leave in December?

I don’t know—that’s a tough question. It’s like saying what you will miss most about a person. I think it’s the combined attributes. You can’t really check one off. You can’t really reduce it down to a smile or a friendly gesture. None of my friends have been in a place this long. It’s always been connected to my life. 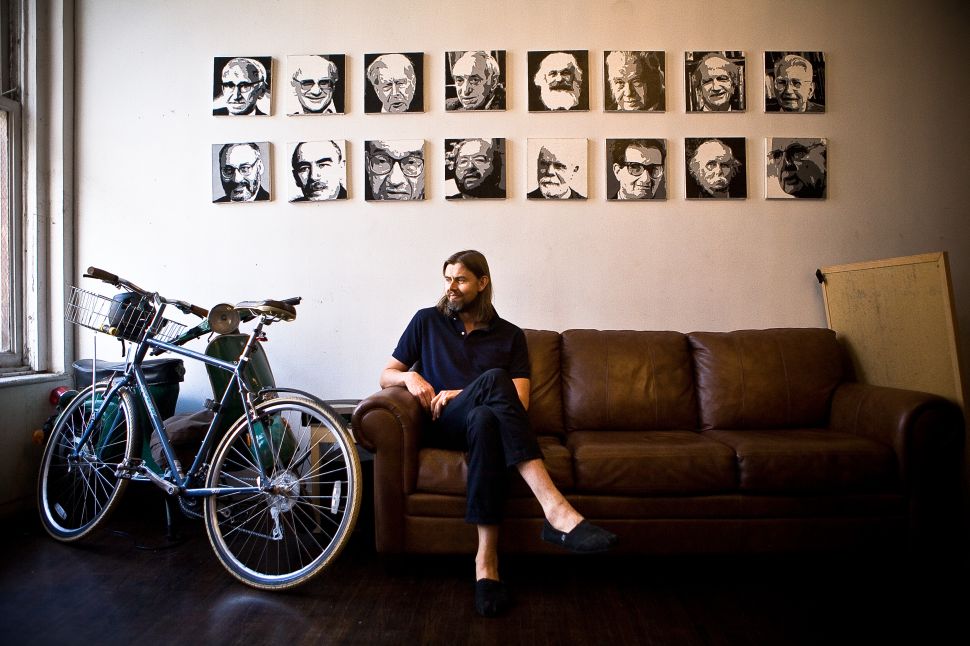