Balthus: A Biography by Nicholas Fox Weber is the only major biography currently in print of the artist, born Balthasar Klossowski de Rola, who has a major survey opening at the Metropolitan Museum of Art this week. First published by Knopf in 1999, the book is being reissued by Dalkey Archive Press on Sept. 25, the same day the exhibition opens, in part, according to John O’Brien, Dalkey’s founder and publisher, to coincide with the Met show (called “Balthus: Cats and Girls”). The Met, despite Dalkey’s supposed efforts, will not be stocking the biography in its bookstore.

“The exhibition curator is a woman named Sabine Rewald,” Mr. Weber said in an interview. “I refer to her on numerous occasions. She’s a scholar for whom I have a tremendous amount of respect. She’s always been burned by Balthus. He couldn’t have enough bad things to say about her.”

Ms. Rewald is widely considered to be the foremost scholar of Balthus’s work. She curated his last museum retrospective in New York, which was also presented at the Met, in 1984, and has authenticated much of his work for auction houses—no easy task considering that Balthus had a tendency to draw on scraps and very possibly—according to Mr. Weber’s book—put his name on several alleged forgeries made by a former lover (who also happened to be his step niece). Balthus, who died in 2001 and was extensively interviewed by Mr. Weber, is continuously rankled by Ms. Rewald in the book, providing a kind of narrative thread demonstrating the artist’s orneriness in the face of institutions. Mr. Weber writes:

Balthus told me that he had recently written to Sotheby’s and Christie’s to issue a warning that Mrs. Rewald should not be permitted to issue or deny authentication of his work. Yet either he was never, in fact, in touch with the houses himself as he had told me, or they disregarded his request, because, as recently as September 1993, Tana Matisse, the widow of Balthus’s lifelong dealer, complained to me about Sabine Rewald having authenticated, for Sotheby’s, a “Balthus” drawing Mrs. Matisse recognized as being clearly false. Mrs. Matisse took on the auction house about this matter, reminding the authorities there that when an artist is still alive, he should be the source of authentication, and pointing out Mrs. Rewald’s error.

When asked about the decision to not stock the book, a Met spokesperson said, “[M]ost biographies of Balthus are currently out of print, including Balthus: A Biography by Mr. Weber.”

But Dalkey’s publisher, Mr. O’Brien, said that Knopf had reached out to the Met on his behalf about selling the book. “The word came back that the Met would not be ordering any copies,” Mr. O’Brien said in an email. “I had had high hopes for such an order since I was releasing some copies of the book early in order to have them available in relation to the exhibit.”

When this detail was brought to the Met’s attention, the museum spokesperson said:

When the exhibition shop was being planned this summer for Balthus: Cats and Girls, the 1999 biography by Nicholas Fox Weber was out of stock and unavailable. Also, as I mentioned in my email yesterday, most biographies of Balthus are currently out of print.  Since our exhibition shops are intended to carry products directly related to our exhibitions, and since part of the museum’s mission is to publish new scholarship from our curators in conjunction with their exhibitions, the Balthus: Cats and Girls exhibition shop will carry, first and foremost, the catalogue created by the Metropolitan Museum to accompany the exhibition.

This is, according to one editor at a major publishing house, a common disconnect between mainstream publishers and museums. Museum bookshops are often approached by publishers with art-related books that they wish to sell and are turned down so as not to compete with the sale of exhibition catalogues, which museums put a lot of money into producing and have more at stake in selling.

When told about the Met’s claim that his book was not stocked because it was unavailable, Mr. Weber said via e-mail, “Before I read this statement from the Met, I was not really irritated. Now I am. They were approached by the rep for Dalkey Archive with a new edition of the book. The buyer at the bookstore said he would check with the exhibition curator. She—Sabine—nixed it, which is her privilege. But now their excuse is that the old edition was sold out, as are ‘most biographies of Balthus—’ which is ridiculous, since there are no other real biographies of Balthus, in spite of some puff books and memoirs.”

This is not the first time that Mr. Weber has been left out of the Met’s bookstore with a book related to one of the museum’s exhibitions. In 2007, Knopf published Mr. Weber’s book about the art collector Edward Cabot Clark and his brood, The Clarks of Cooperstown, to coincide with an exhibition about the family’s collection at the Met. The New York Times reported at the time that Mr. Weber had “knocked himself out to finish writing in time for the exhibition because, he said, the museum had agreed to carry his book in its store.” The book was not initially stocked at the museum, as Mr. Weber’s editor, Victoria Wilson, told The Times, because of the book’s depiction of 19th century homosexuality. The Met eventually backtracked and stocked the book.

Beyond Balthus’s critical remarks about Ms. Rewald (Balthus told Mr. Weber that Ms. Rewald’s catalogue for the 1984 show at the Met was “rife with inaccuracies,” according to the author), Mr. Weber’s book caused no small amount of controversy when it was released. This is an artist that the critic Peter Schjeldahl once characterized quite plainly as engaging in pedophilia. When Mr. Weber’s book was excerpted in The New Yorker in 1999, it ran alongside an image of Balthus’s most controversial painting, The Guitar Lesson, from 1934, in which a woman engages in digital stimulation with a young girl, nearly naked from the waist down and splayed across the woman’s lap. Mr. Weber said the magazine lost a number of subscribers as a result of the artwork. (The New Yorker could not confirm this detail, but a spokesperson for the magazine did find the original article in the publication’s archives and couldn’t help but mention the image was “quite provocative.”)

“People may disagree with what I’ve written,” he continued, “but I put my heart and soul in trying to understand what this man was trying to do in portraying young girls.”

He was also quick to add that he considers the Met to be “paradise.”

“It’s not a good feeling to be left out of paradise,” he said. 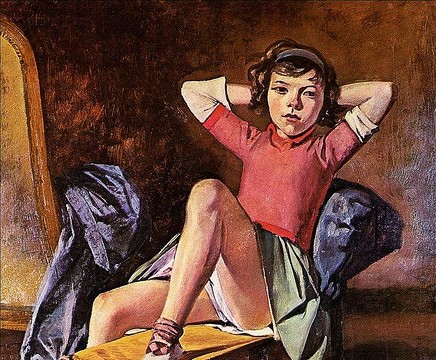